Is Gross Domestic Product (GDP) an adequate measure of a country’s development across many dimensions?

Alternate measures and their limitations:

Several alternative measures have been proposed to capture the social dimension of development, combined with or independent of economic indices.

The need of Social Progress Index:

The SPI was launched in 2013 and is based on 52 indicators of countries’ social and environmental performance. It includes no economic indicators and measures outcomes.
it has been created by a group of academics and institutions constituting the Social Progress Imperative (www.socialprogressimperative.org).
This index has three major domains:
1) Basic Human Needs.
2) Foundations of Wellbeing.
3) Opportunity.

Each of these has several clusters of specific indicators (as shown below). 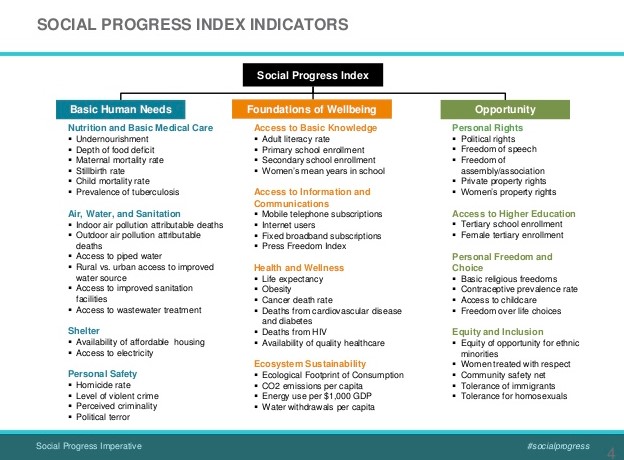 The study (2005-2016) helps analyze whether States, especially using social and environmental indicators, are heading in the right direction. It is also essential to help adjust policies as well as public and private investments.

States can be ranked using social and environmental indicators on the basis of:

In conclusion, SPI can bring substantial betterment in the policy discourse on development. With the move to getting it introduced at a sub-national level, the index is expected to help development practitioners and other stakeholders in analysing well-being in a better manner.
Focusing exclusively on GDP implies measuring progress in purely monetary terms and failing to consider the wider picture of the real things that matter to real people. GDP isn’t bad but it’s not the whole story, alongside economic growth social progress is more important for policymaking. Even as India commits itself to move on the fast track of economic growth, it must be mindful of the need to invest in improving its social indicators as well

Hope floats on a boat