India has largest diaspora across the world

The need for legislation which secures the rights of people with mental illness is a necessity for a nation like India.
Instances such as the 2001 Erwadi mental home fire, in which chained patients were charred to death, are a reminder of our apathy towards the mentally disabled.
The neglect of mental health is evident from a World Health Organization report which estimated that 50 million Indians suffered from depression.

The enactment of the Mental Healthcare Act, 2017 by the current government is an attempt to protect the rights of the mentally ill and enable citizens to decide on the method of treatment in case of mental illness, lest they are mistreated or neglected.
India ratified the UN Convention on Rights of Persons with Disabilities in October 2007.
The United Progressive Alliance government (UPA-II) initially introduced the Mental Health Care Bill in August 2013 to replace the Mental Health Act, 1987 to bring the law in consonance with the obligations of the UN convention. The Bill lapsed due to the dissolution of the Lok Sabha.
The 16th Lok Sabha led by the National Democratic Alliance (NDA) reintroduced the Bill in August 2016 with 134 amendments. The modifications led to a complete overhaul of the intent, structure and provisions of the original Bill, and the spirit of the UN convention was missing.

Key issues that should be considered in order to ensure that the legislation creates an ecosystem for proper treatment of the mentally disabled.

The Mental Healthcare Act, 2017 is an important legislation that is indicative of a progressive nation. The ministry must listen to stakeholders who have submitted responses on the draft rules and regulations before finalization. The legislation will be effective only if the gaps pointed out by the stakeholders are discussed and solved.

Government (Ministry of Electronics & Information Technology, MEITY) had set up the committee on Data Protection in India, led by Justice B.N. Srikrishna.

The objective of this committee was:

The Committee has recently released its provisional views on the formulation of a data protection framework and invited public comments.

Social media sites, telecom operators, government agencies and every such body that gets to collate data on individuals by way of the nature of their operations would soon be governed by a set of laws that would protect an individual’s sensitive personal data or information (SPDI). 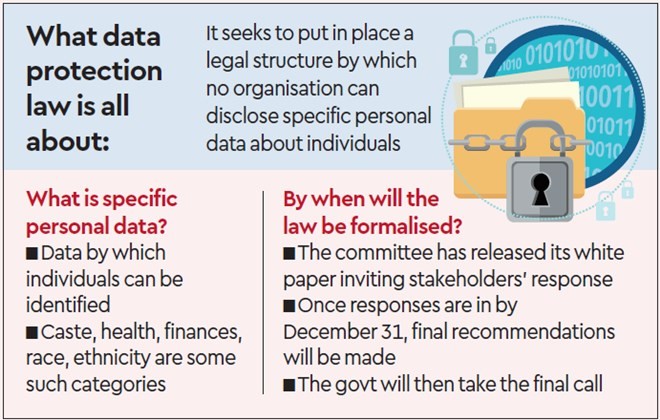 Following are the seven key principles proposed by the committee on data protection:

Justice B.N. Srikrishna Committee suggest that the above seven key principles should guide the data protection framework in the country.

The Committee has done a commendable job on a number of counts:

Our country urgently needs a strategic position on data which represents risks such as colonisation, privacy issues and a “winner-takes-all market,” in which the best players are able to seize a very big portion of the rewards, and the remaining contenders are left with very little. Data is being vacuumed out of the country and going into unaccountable systems that don’t come under Indian law, which probably share data with foreign governments.

In order to protect people’s privacy and make companies accountable, India needs a data protection law “as soon as possible” as it is a “fundamental thing” so that the users can demand from the domestic or foreign companies to share their data when needed. “This is not a technology problem, but a policy problem.”

AI’s won’t really rule us, they will be very interested in us

Seeing through a glass darkly

The decline of the WTO

1. Sufism indeed was a religion of intense devotion, love was its passion; poetry, song and dance, its worship and passing away in God its ideal. Comment.