Amendment to Insolvency and Bankruptcy code 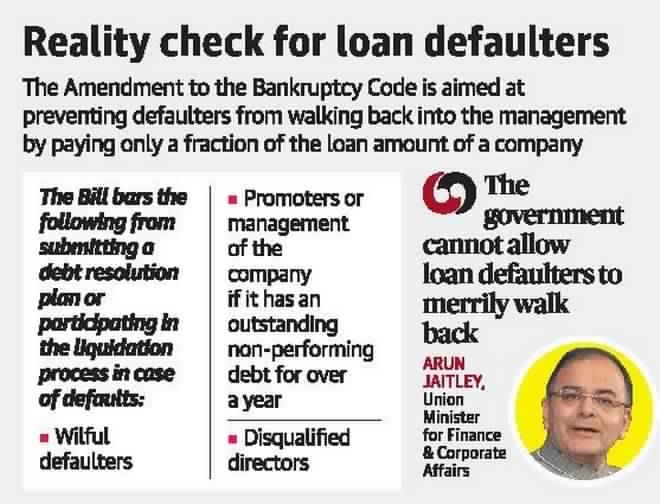 Part of: Mains GS Paper II- Awareness in the field of robotics.

There is a need for removing discretion and codifying the conflict of interest inherent in having senior bureaucrats assuming corporate roles post-resignation or retirement.

What is conflict of interest?

A conflict of interest (COI) is a situation in which a person or organization is involved in multiple interests, financial or otherwise, one of which could possibly corrupt the motivation or decision-making of that individual or organization.
A conflict of interest exists if the circumstances are reasonably believed (on the basis of past experience and objective evidence) to create a risk that a decision may be unduly influenced by other, secondary interests, and not on whether a particular individual is actually influenced by a secondary interest.

At present, conflicts of interest that arise out of an MP’s private interest are regulated by the Code of Conduct for Ministers; Code of Conduct for Members of the Rajya Sabha, Rules of Procedure and Conduct of Business in the Lok Sabha and Rajya Sabha and Handbook for Members. Both Houses have an Ethics Committee to oversee the ethical conduct of MPs. The similar is the case with civil servant and judiciary. But by and large, these ethical books have been ineffective so far.

In Canada, ministers must follow the Conflict of Interest and Post-Employment Code that outline ethical standards and private and public interests.

We need legislation to make non-disclosure of a conflict of interest punishable.

A culture of transparency needs to be fostered.

There is nothing wrong in letting experienced bureaucrats utilise their expertise in the private sector — if adequate rules are framed and followed that enable the elimination of any conflict of interest.

As acknowledgement of conflict of interest exists in the corporate world, with significant oversight through consumer watchdogs, credit rating agencies and activist shareholders, the same should exist for governance.
Conflicts should be codified in a stringent legal framework, making compromise of the public interest a serious crime. Cleaning up business interests, and strengthening a moral code over such conflicts is needed.
Without such transformation, India’s society, governance and its private sector will remain open for insider trading.

Solving the problem of Fires Accidents: Mitigation and Prevention strategy

On an average, in India, every year, about 25,000 persons die due to fires and related causes. Probably many of these deaths could have been prevented, had we taken enough fire protection measures. No comprehensive data is available in India on the economic losses suffered on account of fires.

Recently, on the night of December 28, 14 people died and 54 others were injured as the result of a fire at a restaurant in Mumbai’s Kamala Mills.

There were at least 11 major fires in Mumbai alone this year, of which the second-last one on December 25 killed 12 workers in a Gujarati snack shop in Saki Naka. The greater number of these cases occurred in factories or small manufacturing units.

The onus of the majority of these fires rests with the owners of the places. But whether the fires took place in residential buildings, work places or restaurants, the main culprit is the respective State Municipal Corporation within the Indian polity.

Notions of safety, security and quality are not built into us from school level. We don’t get basic first aid training. Our cultural attitude is one of “chalta hai” (It is Okay!!) and we think the next building will catch fire, not ours. It will happen to somebody else not me.

There has to be a safety officer who sits in a room with CCTV monitors, sprinkler systems, fire alarm systems, fire extinguishers. Often people are not trained how to use the fire extinguisher, and which one to use when. We have national building codes, local building bylaws, national electrical codes. But they are never implemented or enforced because of systemic problems.

There should be lessons learnt from the fatal fire in Mumbai. By properly blending both precautionary and mitigation measures, we can greatly reduce the adverse impacts of a fire hazard and thereby prevent the loss of lives and property.

Taking on the gatekeepers

Before the next Mumbai disaster

All India Radio (AIR) : Prime Minister’s Visit to Manila and its Significance