Changes made to Contract farming Bill

Major objectives of the Bill:

The initial support for Pakistan came from China, Saudi Arabia, Turkey and the Gulf Cooperation Council countries is cause for concern in New Delhi, given the recent diplomatic outreach by India.

Such sanctions will persuade Pakistan to stop state support for these terror groups and become a responsible player on the global stage and a responsive neighbour.

The “Healthy States, Progressive India” report has been released recently.
The focus has been on the performance and annual progress of states and Union territories on a myriad of health indicators.

Kerala is the leader among large states, closely followed by Punjab and Tamil Nadu. Uttar Pradesh, Rajasthan and Bihar are the least-performing states. Mizoram is the best-performing small state, followed by Manipur, while Nagaland and Tripura take the final two spots. Lakshadweep secured the top spot among Union territories, and Dadra and Nagar Haveli is at the end of the rankings.

The “Performance on Health Outcomes” index:

The index is made up of 24 indicators in three different domains—
Health outcomes, Governance and information, and Key inputs and processes. The “health outcomes” account for 70% of the weight, and the other two domains weighs 12% and 18%, respectively.

Key results that emerge from the health index: 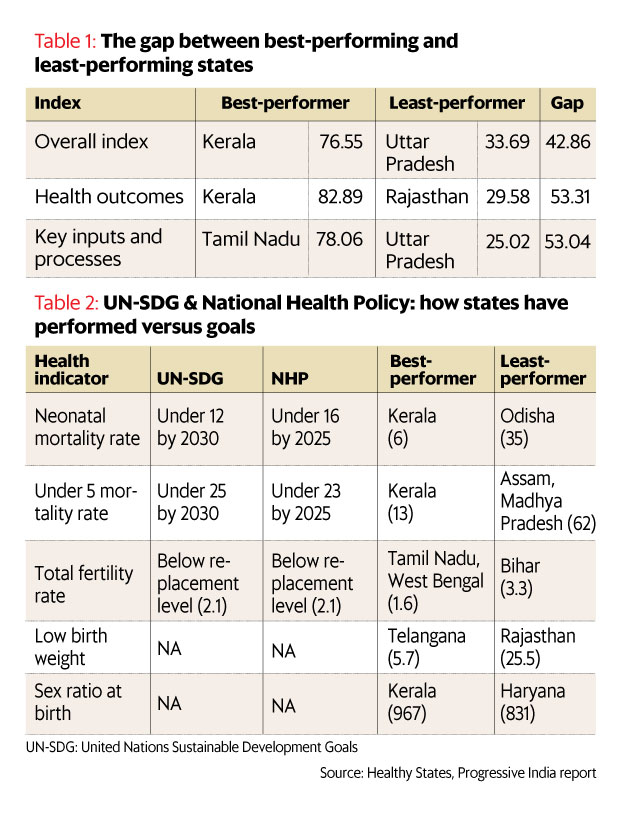 Lessons from the health outcomes index:

Measures like upgrading and setting up of health and wellness centres under the Ayushman Bharat Scheme, the National Health Protection Scheme and annual publication of the Index and its availability on public domain on a dynamic basis will help us realize the goal of “good health and well-being” for all citizens(SDG3).

The National Health Protection Scheme (NHPS), announced in the latest budget, is being hailed as the world’s largest public healthcare programme, which will cover about 40 per cent of India’s population. While any public effort at providing free healthcare to the poor is welcome, this is not the first public health insurance programme in the country.
Many states, including Maharashtra, Karnataka, Rajasthan, Andhra Pradesh, Goa and Tamil Nadu, have successfully implemented health insurance programmes, easily covering over 50 crore people.

NHPS will have to consider many critical aspects.

Insurance-based intervention in the health sector can only be a partial solution. The government cannot, and must not, abdicate its responsibility of providing a high-quality and affordable public health infrastructure.

Cornered by the quad