Q.1) Why has SAARC withered as a regional grouping and failed to address areas of common interests? Examine. Also comment on the potential of BIMSTEC as an alternative to SAARC.

The failure of SAARC to nurture cooperation in South Asia has pushed regional players to search for an alternative.  BIMSTEC, grouping the nations in the Bay of Bengal region, is popularly favored as the viable option. Two decades since its inception, however, BIMSTEC’s successes have been minimal.

SAARC and its issues:

SAARC has eight member countries: Afghanistan, Bangladesh, Bhutan, India, Maldives, Nepal, Pakistan and Sri Lanka. While the organization was intended to enhance regional cooperation in South Asia, from its very inception, member countries treated it with suspicion and mistrust.

The SAARC has come under serious scrutiny in the last few years, as it has failed to address the areas of common interests in all the arenas.

In recent times, the Bay of Bengal Initiative for Multi-Sectoral Technical and Economic Cooperation (BIMSTEC) has gained more favor as the preferred platform for regional cooperation in South Asia.

Before delving into the workings of BIMSTEC, one must understand the need for regional cooperation in South Asia in the first place. Trends in global affairs suggest growing resistance towards regional cooperation, once considered a preferred means for propelling economic prosperity among participating countries.

2. Examine the significance of ASEAN for India’s economic, geo-strategic and security imperatives.

The year 2017 was an important landmark as India and the ASEAN commemorated 25 years of their partnership, 15 years of summit-level interaction, and five years of strategic partnership.

There has been a sense of disillusionment on both sides about the present state of play in the relationship. While the ASEAN member states have been disappointed that India performs less than its potential in the region, New Delhi’s expectations regarding a more robust support for its regional outreach too have not been met.

India-ASEAN relations have evolved over time. The need now is to focus on functional cooperation.

3. India’s engagement with the African countries is one that of shared history of colonialism and struggle against the imperial powers. It makes India the natural partner for the Africans. However, on the contrary, it is China that has made deep inroads into the African continent. Why? Analyse.

India’s relationship with Africa dates back to many centuries which started during colonial era with movement of Indians to work in African fields, studies purpose and entrepreneurship. One of the famous person among them was Mahatma Gandhi.

How India and Africa are natural partners:

But China has made deep inroads:

India is also trying to catch up with china in terms of its presence in African continent. But for near future matching China’s presence will be difficult given the present home conditions where we need to first concentrate on growth and development at home turf.

4. Latin America remains a vastly under-explored avenue in India’s foreign policy. Do you agree? How can India benefit by deepening its ties with the Latin American countries? Discuss.

Until now India’s presence in Latin America is limited to Brazil and trade relationship with that part of world is also very limited. Even the bilateral relationship is non-existent except with Brazil. Presently we have relationship only through MERCOSUR which is a trade bloc comprising 4 latin American countries.

Why Latin America is under explored:

How India can benefit:

Separate policy is required under foreign policy for that region. India can explore the region starting by Bilateral Visits, Cultural exchange and organizing trade shows by diplomatic offices. Then eventually private sector will follow when they identify opportunity for growth and development. By foundation has to be set by government.

5.  THE GULF REGION IS CENTRAL TO INDIA’S ‘LOOK ENERGY POLICY’, AND IS ALSO INDISPENSABLE FOR INDIA’S SECURITY CONCERNS. ANALYSE.

India is an energy-deficit country. It imports 80% of its crude oil and 40% of its natural gas needs. Yet 300 million in India are still without electricity. As the population further increases, the need for rapid economic development will hinge on availability of energy resources. The resource-rich Gulf region can play an important role in fulfilling India’s future energy needs: 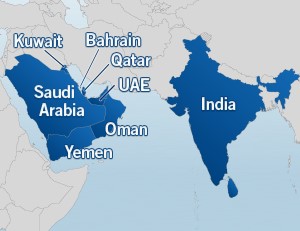 Moreover, India shares close relations with almost all Gulf nations which employ the largest Indian diaspora of 7 million sending huge remittances. Stability in the region is important to ensure the security of Indian diaspora.

Furthermore, countries like Saudi Arabia and UAE share close relations with Pakistan and can play a huge role in putting pressure on the latter regarding its alleged support to terrorism. India can leverage her deepening relations with the Gulf countries to isolate Pakistan on the international platform. Therefore, the Gulf region is not only important for India’s energy needs but also her security concerns, too.