MSP of notified crops to be more than 1.5 times their cost

GSAT-6A: A satellite designated to be used by the Armed Forces 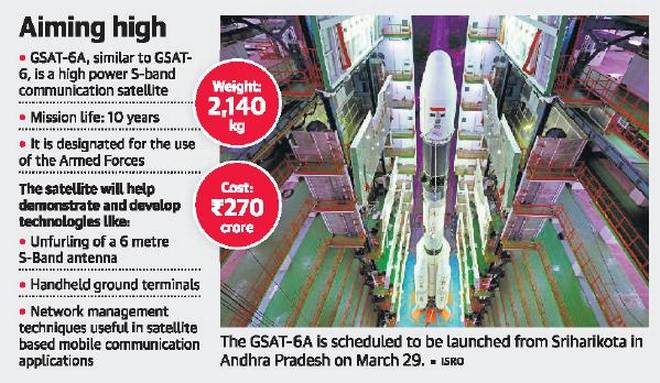 The recent wildfire tragedy in Theni in Tamil Nadu, in which 20 trekkers lost their lives, once again brings into focus forest fires in India.

How is the information about fire relayed?

A fire anywhere in the world is detected by NASA’s MODIS (Moderate Resolution Imaging Spectroradiometer) and VIIRS (Visible Infrared Imaging Radiometer Suite) satellites.
The Forest Survey of India (FSI) analyses the data by overlaying the digitised boundaries of forest areas to pinpoint the location to the exact forest compartment.
The FSI relays news of the fire to the concerned State, so that the Divisional Forest Officer (DFO) in charge of the forest where the fire is raging is informed.
A few years ago, the time lapse between spotting the fire and the news reaching the DFO was five to six hours, but this has been reduced to about two hours recently.
Usually, there is a master fire control room which is informed and which sends firefighters from local fire crew stations to fight the blaze.

How to mitigate damage?

Increasing the field staff of Forest Departments by discontinuing the claimed ‘forest plantations’ would help control forest fires, which in turn would help rejuvenation of fire-stressed forest ecosystems. This would help indigenous forests grow back.

US recently took action against India’s export subsidies at the World Trade Organisation.
This can be seen as another example of the superpower’s growing economic aggression against trade partners.

Last year the WTO had officially notified that India’s per capita Gross National Income (GNI) had crossed $1,000 three years in a row.
According to WTO rules, countries can give export subsidies only as long as their per capita GNI is below $1,000.
Once it is established that the higher income is there to stay (with three consecutive years of GNI breaching the $1,000 threshold), countries can no longer enjoy the special dispensation of export subsidies which is otherwise banned under WTO rules.
India continues using export subsidies.

Expecting India to change a plethora of export subsidy schemes like the Merchandise Export from India Scheme (MEIS) used across sectors all of a sudden could be considered harsh.
But, breaching the $1,000 mark was something India could see coming.

The Foreign Trade Policy, which was announced in 2015, as well as the review of the policy announced last year, talked about the need to re-calibrate existing export promotion schemes. However, nothing was done on the ground.

In its defence, India has said that it believes that it is entitled to an eight-year phase-out period
The contention is based on the argument that when the Agreement on Subsidies and Countervailing Measures was implemented in 1994-95, the countries with GNI higher than $1,000 got eight years to get rid of their export subsidies and, therefore, it should get the same.
But the two situations are not comparable as initially the phase-out period was extended to give comfort to members when the pact kicked in and more than two decades have passed since then.

The government should hold wide-ranging discussions with industry and related ministries to look at the best possible alternatives to the export subsidy schemes which could include technology upgrading funds, capital expenditure subsidies and funds for research and development.

The government needs to draw up alternative schemes.
All the ministries need to take the matter seriously and cooperate with the commerce ministry to decide on ways to continue extending support to exporters without violating WTO rules.

The need for special attention