Bringing accessibility and transparency in the administration of justice

Exceptions – No live-streaming of cases involving national security concerns, matrimonial disputes and rape cases, as it affect justice and amount to a violation of the fundamental right to privacy.

Part of: GS Prelims and Mains II – Development and management of social sector

Six higher education institutions have been named Institutions of Eminence (IoE) by the Centre.

In order to find a fine balance between these twin objectives, India has followed myriad of policies that impact both producers and consumers. These include –

However, studies have shown that many of these policies work in complex ways and highly deviated to meet the primarily stated objectives.

Therefore, policy-making should be based on more informed and evidence-based research.

Highlights of joint study by OECD and ICRIER

OECD and ICRIER jointly undertook research over two years to assess the nature of agricultural policies and its impact on producers and consumers.

A positive PSE means that policies have helped producers receive higher revenues than would have been the case otherwise, and negative PSE implies lower revenues for farmers due to the set of policies adopted. 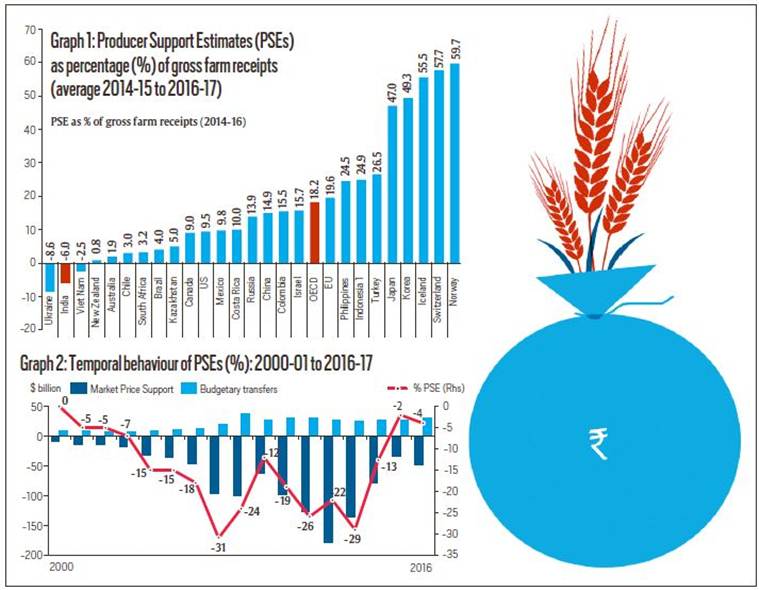 This indicates that despite positive input subsidies, farmers in India received 14 per cent less revenue due to restrictive trade and marketing policies.

The negative PSEs were particularly large during 2007-08 to 2013-14 when benchmark global prices were high but Indian domestic prices were relatively suppressed due to restrictive trade and domestic marketing policies. (In other words, output prices that producers receive, benchmarked against global prices of comparable products was very low).

Therefore, we can deduce that there has been a pro-consumer bias in India’s trade and marketing policies, which actually hurts the farmers and lowers their revenues compared to what they would have received otherwise.

Policies have failed to meet the objective of – incentivising farmers to raise productivity, building an efficient and sustainable agriculture that augments farmers’ incomes and fostering rural growth and jobs all along the value chain.

The way ahead: (important)

With these policy changes, many of which are already underway, will make Indian agriculture more competitive, more vibrant, sustainable and resilient, and will also augment farmers’ incomes on a sustained basis.

Reforms to domestic market regulations and direct benefit transfers for vulnerable sections of the population could be the win-win solution.

We live in an uncertain time, an age of disruption and much of the world seems to be in a state of bewildering confusion.

The world has witnessed major political upheavals; escalating levels of violence; technology has become the biggest disruptor of all; many large firms are being challenged by start-ups; Artificial Intelligence is threatening everything that we are aware of. These breed uncertainty, apart from confusion.

In a world of utter confusion, autocracies or dictatorships have remained more stable, while democracies seem increasingly dysfunctional.

Under President Xi Jinping, China, for instance, is making steady progress, despite the occasional dip in economic forecasts.

Mr. Xi and the Chinese Communist Party are on achieving several milestones such as –

Russia is, again, not constrained by contrarian pulls and pressures.

Other dictatorial regimes, such as Turkey, are proving more resilient than democratic regimes across the world, and better able to manage turmoil within and outside their borders.

Most democracies, on the other hand, reveal a far from homogeneous state of affairs, with ruling and opposition parties increasingly working at cross purposes.

Indian democracy, unfortunately, is not an exception. The Bharatiya Janata Party (BJP) currently projects an image of a strong centralised party. Most other parties are split by internal dissensions. Yet, the BJP has been unable to ensure the smooth functioning of Parliament.

Without a serious debate in Parliament, it would be difficult for the government to reach a consensus on how to deal with this kind of situations.

India needs a national consensus to tide over the crisis and withstand U.S. pressure, since succumbing to it would be detrimental to our claims to ‘strategic autonomy’.

The time has, hence, come for the government to seek out the Opposition to debate some of these issues inside Parliament, so that foreign policy, at least, remains on an even keel and is not buffeted by the cross-winds of adversarial party politics in the country.

In other words, India needs strategic cohesion, and Government-Opposition dialogue is vital for this.

Q.1) Identify the person associated with the following achievements:

Q.2) Which of the following is/arepercussion musical instrument used inIndia?

Q.3) Consider the following pairs (tribes and associated tiger reserves which they helped in increasing the tiger population)

In need of a practical plan: on judicial appointments

Don’t blame it on WhatsApp: on rumours and lynch mobs

Here’s how the government plans to use DNA profiles, samples and records

King of the court