‘Defaulter count in PSBs has risen 60% since FY15’ 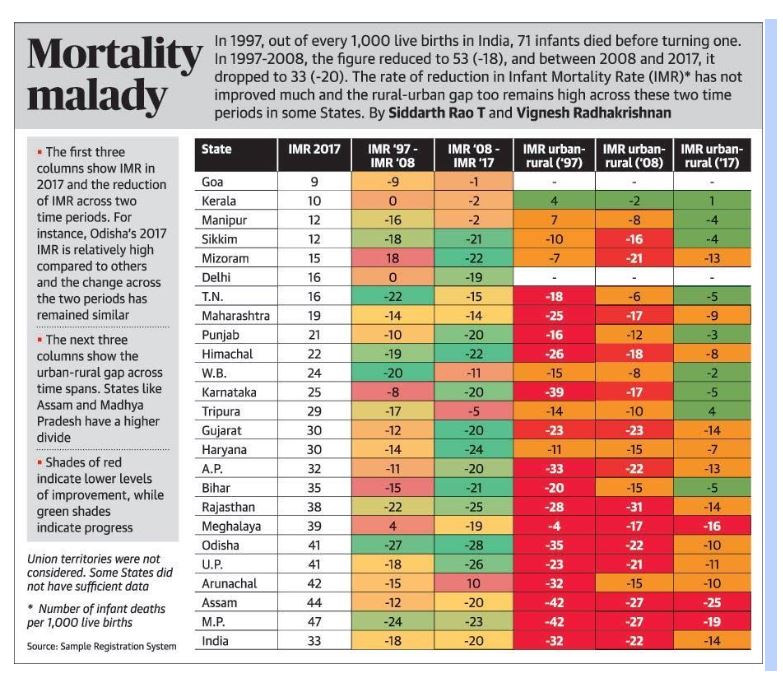 Some of the targets to be achieved under SDG 3:

Reasons for high mortality rates: Which accounted for 62% of all child deaths

India’s Constitution-makers thought of India as a union of States with a centripetal bias, done, advisedly, to preserve the unity and integrity of a newly fledged nation. Since then, the Indian economy, polity, demography and society have undergone many changes.
It is in this context that India’s fiscal federalism needs to be re-visited.

Way ahead: Removing the imbalance

In the past, the Planning Commission used to give grants to the States as conditional transfers using the Gadgil-Mukherjee formula.  Now with the Planning Commission disbanded, there is a vacuum especially as the NITI Aayog is primarily a think tank with no resources to dispense, which renders it toothless to undertake a “transformational” intervention. On the other hand, it is too much to expect the Union Finance Commission to do the dual job.
There is an urgent need for an optimal arrangement.

The above perspective will have to be translated below the States to the third tier of government. This is crucial because intra-State regional imbalances are likely to be of even greater import than inter-State ones. Decentralisation, in letter and spirit, has to be the third pillar of the new fiscal federal architecture.

It is to the credit of our democratic maturity that the GST Bill was passed unanimously by Parliament; but in its present form, it is far from flawless.

NITI Aayog can play an important role in refreshing India’s fiscal federalism. It is time we reboot the institution.

India as a space power

Space has undoubtedly become a military theatre. The US, Russia, China and, since March, India, have shown that they have the capability to physically destroy satellites in orbit. The post-Cold War space arms race is underway.

What does it mean to be a space power?

The US, Russia, China and Europe developed space capabilities for military purposes first, and then put those technologies to civilian use.
India’s space quest, on the other hand, was focused on civilian use—weather forecasting, broadcast, telecommunications and remote sensing. It was only in the mid-1980s that technology from the Indian Space Research Organisation’s (Isro) Satellite Launch Vehicle-3 was employed in the Agni ballistic missile.
When it comes to satellites, India has a handful of military satellites in operation, compared to over 40 civilian ones. Our first dedicated military satellite was launched only in 2013.

Just like India was late to militarize space, it has been late to weaponize it. That’s not a bad thing, but in the changed circumstances of the 21st century, it is time to rethink our approach.
India’s unstated space doctrine is to use space to promote development and the well-being and prosperity of its people. What we must do now is to include the word “security” in that sentence. In doing so, the policy goal will change from having a space presence to being a space power.

The government’s decision to set up a Defence Space Agency (DSA) with command over the space assets of the Army, Navy and Air Force is the most significant development in India’s defence establishment since the operationalization of the nuclear arsenal around 15 years ago.
It is time the DSA starts working on the path of making India a space power.