Global warming is a serious concern which needs to be addressed globally.

According to Intergovernmental Panel for Climate Change (IPCC) report – Global carbon emissions have to fall by 45% from 2010 to 2030 and has to reach zero at the end of 2050.

So we are left with a decade to control global warming. If we do not meet these figures by the next 10 yrs, then the tropical regions of the World, mainly the global South will be impacted more because of their low altitudes and relatively high temperatures. The impact was already seen in Tamil Nadu crisis which had scarcity of water during 2019 summer.

Although the global South has impacted less for the global warming, it is acting as a receiver from the life style change towards the Global North.

Environment is becoming a casualty but a genuine global consensus to address the problem is yet to be found.

So both North and South parts of world must work collaboratively towards addressing the issue and plan measures to control it. But as the relationship between both is unequal, there is a call for a balanced approach to address global warming together.

What is Carbon Tax? 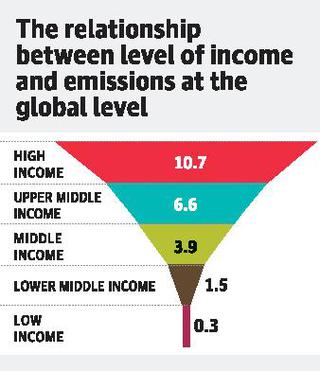 What is Carbon tax sharing?

How to calculate carbon tax?

USA and China ranked the top two payer nations list as their absolute amount of energy transfers is higher compared to the global averages.

India on the contrary comes in the compensated countries list because of its high population size and low global emission rates.

The time has come for all of us to focus on mitigating the global carbon emission rate to the lower levels.

This can be achieved from combined efforts of payer nations and compensated nations by sharing their per capita carbon emission.

With this global policy approach, even the high income nations whose per capita emissions are lower will also be benefitted along with poor energy countries. All that needs is the countries to step down their emission ladders without compensating their standard of living there by achieving global green Robin Hood tax.

Habeas corpus judgement – Its impact on the civil society

What is Habeas corpus judgment?

Based on the statement from H R Khanna who opinioned that ‘the greatest danger to liberty lies in insidious encroachment by men of zeal, well-meaning but lacking in due deference for the rule of law’. According to which if the state government decides to infringe people’s right with respect to a larger goal, then it must prove a rational relationship for the goal and measure the adoption demonstration. The decision to implement or to take off entirely depends on the Supreme Court in synchrony with the state government. This also gives the right to court to decide when to detain, how long to detain, whom to detain depending on local conditions at state.

Example of Habeas corpus judgment in 2019

The state of Jammu & Kashmir was kept under communication breakdown/lockdown starting from 5th of August 2019. Based on which many political leaders along with common man were detained from their fundamental rights. This was followed by downgrading Article 370 in the state which converted these two states into union territories.

Even though there are arguments regarding the detention of communication lockdown in the public, newspapers, interviews etc, the court have not given any explanation about this matter. Delhi High Court is continuously adjourning the petition of a political leader Shah Faesal who challenged about his detention in the state. The same case is the Supreme Court which is repeatedly adjourning the petitions with respect to the detention.

No civilian need a permission from the court to travel within India. Even though the court have granted liberty to travel anywhere in India, it failed to give the validity of detention by itself. Habeas corpus judgment or communication lockdown in India does not always end in violence. It is simply to take off the fundamental rights from the people for time being until the law is back in place. Even the individuals are adjusting and abide to the court rules and regulation without raising their voice for their fundamental rights. So this shows the complete executive supremacy from the government bodies to bring in law and order in place which is making the people of Jammu and Kashmir to remain silent.

Striking a blow for investigative credibility

An indefensible transfer that needs to be reversed

Without Article 370, questions may have arisen about definition of J&K territory and India’s claim to POK