Ban of Single Use of Plastic and Waste Management

According to a UNEP report, more than 60 countries have some form of regulation — ban or taxes — on production and use of plastic. But enforcement has not been robust, and only about 30 per cent of the countries reported a drop in consumption. India’s own record in implementing plastic bans has been poor. But by raising the pitch on plastic use, the government is hoping to make more manufacturers comply to regulations.

If not recycled, plastic can take a thousand years to decompose, according to UN Environment, the United Nations Environment Programme. At landfills, it disintegrates into small fragments and leaches carcinogenic metals into groundwater. Plastic is highly inflammable — a reason why landfills are frequently ablaze, releasing toxic gases into the environment. It floats on the sea surface and ends up clogging airways of marine animals.

The Issue: Since half the plastic now produced is meant to be used only once, India has to figure out what plastic it wants to use and ban — and how it will recycle all that trash. 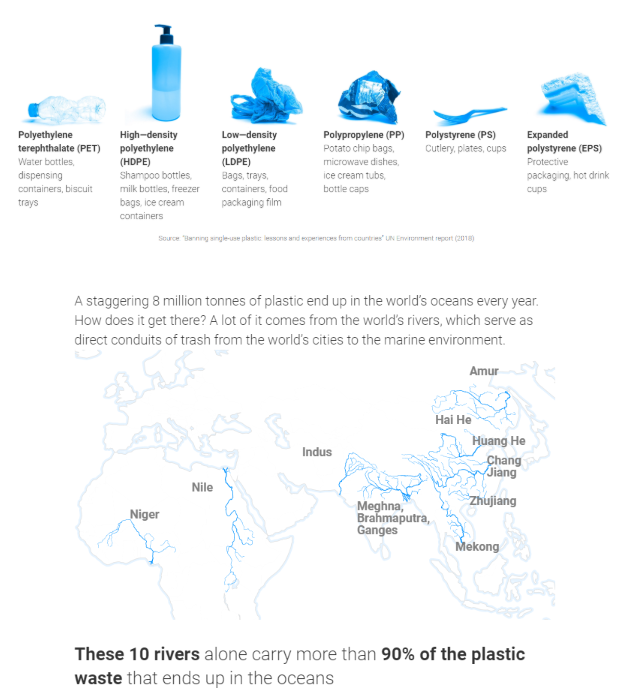 India lacks an organised system for management of plastic waste, leading to widespread littering across its towns and cities.

A key step in that direction was Extended Producer Responsibility (EPR) under the Plastic Waste Management Rules, 2016, which were amended last year. As part of EPR, producers, importers and brand owners — like fast-moving consumer goods (FMCG) and pharma companies — are supposed to take back the plastic waste generated by their products, with the help of waste-management companies

Companies are trying to shift to single-polymer packaging, which would make it recyclable.

The Challenge: While India is one of 63 countries with EPR, its guidelines for the same continue to be vague. There isn’t much clarity on how much of single-use plastic a company puts out needs to be taken back by it.

The Plastic Waste Management Rules, 2016 notified by the Centre called for a ban on “non-recyclable and multi-layered” packaging by March 2018, and a ban on carry bags of thickness less than 50 microns (which is about the thickness of a strand of human hair). The Rules were amended in 2018, with changes that activists say favoured the plastic industry and allowed manufacturers an escape route. The 2016 Rules did not mention SUPs.

Since recycling of plastic is not a permanent solution, manufacturers of single-use plastic have been asked to look for other alternatives that are biodegradable. Railway ministry, which manufactures and sells packaged drinking water ‘Rail Neer’ is also looking for alternatives including polymers to make their packaging biodegradable.

Are alternatives such as compostable or biodegradable plastics viable?

Although compostable, biodegradable or even edible plastics made from various materials such as bagasse (the residue after extracting juice from sugarcane), corn starch, and grain flour are promoted as alternatives, these currently have limitations of scale and cost.

Some biodegradable packaging materials require specific microorganisms to be broken down, while compostable cups and plates made of polylactic acid, a popular resource derived from biomass such as corn starch, require industrial composters. On the other hand, articles made through a different process involving potato and corn starch have done better in normal conditions, going by the experience in Britain. Seaweed is also emerging as a choice to make edible containers.

In India, though, in the absence of robust testing and certification to verify claims made by producers, spurious biodegradable and compostable plastics are entering the marketplace. In January this year, the CPCB said that 12 companies were marketing carry bags and products marked ‘compostable’ without any certification, and asked the respective State Pollution Control Boards to take action on these units.

A ban on single-use plastic items would have to therefore lay down a comprehensive mAechanism to certify the materials marketed as alternatives, and the specific process required to biodegrade or compost them. A movement against plastic waste would have to prioritise the reduction of single-use plastic such as multi-layer packaging, bread bags, food wrap, and protective packaging. Consumers often have no choice in the matter. Other parts of the campaign must focus on tested biodegradable and compostable alternatives for plates, cutlery and cups, rigorous segregation of waste and scaled up recycling. City municipal authorities play a key role here.

The Way Ahead – How to get rid of the plastic menace?

Must Read: Link 1 + Dangers of Plastic + Are We Drinking Plastic?