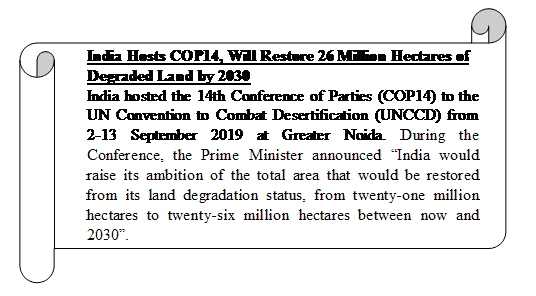 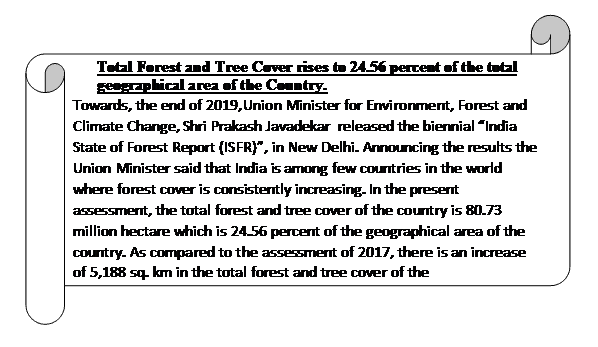 The DNA Technology (Use and Application) Regulation Bill – 2019: The Bill has been formulated recognizing the need for regulation of the use and application of Deoxyribonucleic Acid (DNA) technology, for establishing identity of missing persons, victims, offenders, under trials and unknown deceased persons.

Launch of “Green Crackers” developed by CSIR in a bid to curb air pollution: Green logo and QR coding system was also launched to track manufacture & sale of counterfeit crackers.

CSIR conducts Whole Genome Sequencing of over 1,000 Indians for Biomedical Applications – will be important for building the knowhow, baseline data and indigenous capacity in the emerging area of Precision Medicine.

India State of Forest Report (ISFR): As compared to the assessment of 2017, there is an increase of 5,188 sq. km in the total forest and tree cover of the country.

The report is published by the Forest Survey of India (FSI) which has been mandated to assess the forest and tree resources of the country including wall-to-wall forest cover mapping in a biennial cycle. Starting 1987, 16 assessment have been completed so far. ISFR 2019 is the 16th report in the series.

MoU on Antarctic cooperation between India and Argentina: The MoU will help scientific cooperation on projects in the fields of Earth sciences, as well as those related to the protection and conservation of the natural environment of Antarctica and the Southern Oceans.

Highest priority is accorded to safety in all aspects of nuclear power viz. siting, design, construction, commissioning, and operation. Nuclear power plants are designed adopting safety principles of redundancy, diversity and provided fail-safe design features following a defence in depth approach. This ensures that there are multiple barriers between the source of radioactivity and the environment.

The operations are performed adopting well laid out procedures by highly qualified, trained and licensed personnel. Appropriate Personal Protection Equipments and monitoring aids are provided to all the personnel working in the nuclear power plants.