1. What are shields? How are they formed? Examine the distribution of shields in the world.

A shield is a large area of exposed Precambrian crystalline igneous and high-grade metamorphic rocks that form tectonically stable areas. These rocks are older than 570 million years and sometimes date back 2 to 3.5 billion years.

Shields have been little affected by tectonic events following the end of the Precambrian, and are relatively flat regions where mountain building, faulting, and other tectonic processes are minor, compared with the activity at their margins and between tectonic plates.

Distribution of shields in the world: 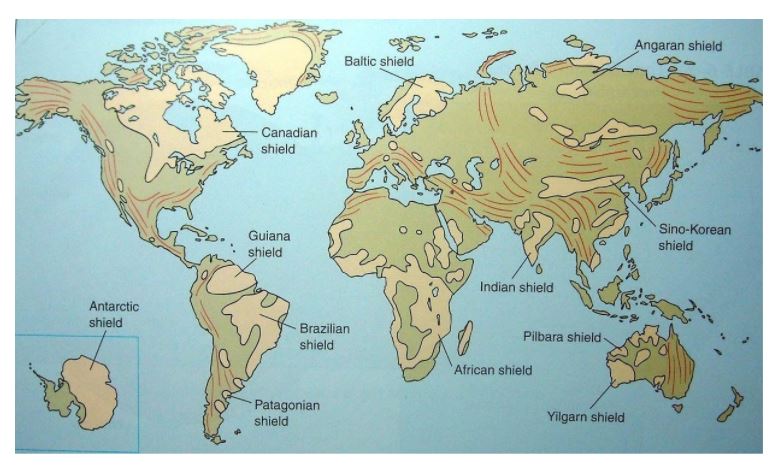 Based on their location Shields are also known to provide other economic benefits like:

We have seen that based on their location shields have different economic significance.  Hence, it becomes important to understand more about the characteristics of shields so that their true potential can be used to achieve sustainable development.

2. How do geographic features of a place aid to pollution? Explain with the help of suitable examples.

It expects students to put a clear picture of how do geographic features of a place aid to pollution with relative examples.

As we have understood that geographical feature  aids the pollution and pollution is emerged as one of the major global threats; a proper, clean and planned approach will help to reduce the impact of pollution and helps to achieve the clean & clear environment for the people.

3. What are ‘internet balloons’? Why was it in news recently? Discuss.

It expects students to discuss various perspectives of ‘internet balloons’ and present a logical arguments regarding its advantages and disadvantages.

Billions of people around the world are still without internet access. Loon is a network of balloons travelling on the edge of space, delivering connectivity to people in un-served and underserved communities around the world. In short, internet balloon is a device which provides internet connectivity while floating in the air.

Recently, A fleet of high-altitude balloons started delivering internet service to Kenya , extending online access to tens of thousands of people in the first-ever commercial deployment of the technology.

With its high end technology internet balloon can prove to be an essential solution to the problem of expanding internet to the every corner of the world. But, at the same time more improvement is needed in them to reduce their drawbacks and achieving the internet connectivity to all.