The net stimulus announced today amounts to ₹ 2.65 Lakh crore. The total stimulus announced by the Government and Reserve Bank of India till date, to help the nation tide over the COVID-19 pandemic, works out to ₹ 29.87 lakh crore, which is 15% of national GDP. Out of this, stimulus worth 9% of GDP has been provided by the government.

Banking constitutes one of the major focus areas of IFSC and is expected to drive and facilitate the other constituent operations in the IFSC in due course. A self-contained regulation laying down the major principles of banking operations at IFSCs is thus an important step in the IFSC reaching its desired potential.

The Authority approved the draft banking regulations at its meeting today, which paves the way for putting in place the rules for the various aspects of banking operations that would be permissible at the IFSC.

The salient aspects of the Banking Regulations include:

The revamped Scheme is mainly related to introduction of following two sub-schemes for mainstreaming private participation in social infrastructure:

Benefits: The aim of the scheme is to promote PPPs in social and Economic Infrastructure leading to efficient creation of assets and ensuring their proper Operation and Maintenance and make the economically/socially essential projects commercially viable. The scheme would be beneficial to public at large as it would help in creation of the Infrastructure for the country.

20th Summit of SCO Council of Heads of State

Chaired by: The President of the Russian Federation Mr. Vladimir Putin

This was the first SCO Summit held in Virtual Format and third meeting that India participated after becoming a full member in 2017.

Underlined the centrality of ASEAN in India’s Act East Policy –

Saffron bowl of India extends to the North East

The saffron bowl, which was so far confined to Kashmir, may soon expand to the North East of India. Plants from seeds transported from Kashmir to Sikkim and acclimatized there are now flowering in Yangyang in the Southern part of the North-East state.

Saffron production has long been restricted to a limited geographical area in the Union territory of Jammu & Kashmir. Pampore region, in India, commonly known as Saffron bowl of Kashmir, is the main contributor to saffron production, followed by Budgam, Srinagar, and Kishtiwar districts. Saffron has traditionally been associated with the famous Kashmiri cuisine. It’s its medicinal values were considered as part of the rich cultural heritage of Kashmir. As saffron growing was confined to very specific areas in Kashmir, its production remained limited. Though the National Mission on Saffron focused on several measures to improve its farming, the measures were still limited to the specified areas of Kashmir.

The corms were irrigated during the month of September and October, which ensured timely corm sprouting and good flower yields. The matching of climatic and geographical conditions between Pampore (Kashmir) and Yangyang (Sikkim) led to the successful sample farming of Saffron in Yangyang.

The project also focused on post-harvest management and value addition of saffron so that quality saffron drying and efficient post-harvest processing can improve saffron recovery, thereby improving its production.

Further, detailed analysis and testing of all parameters, including soil testing, quality, quantity, and possible value addition are planned, for immediate results and extrapolation of the project to other parts of the North East Region along with Micro Food Enterprises.

Demonetisation has helped reduce black money, increase tax compliance and formalization and given a boost to transparency. These outcomes have been greatly beneficial towards national progress. 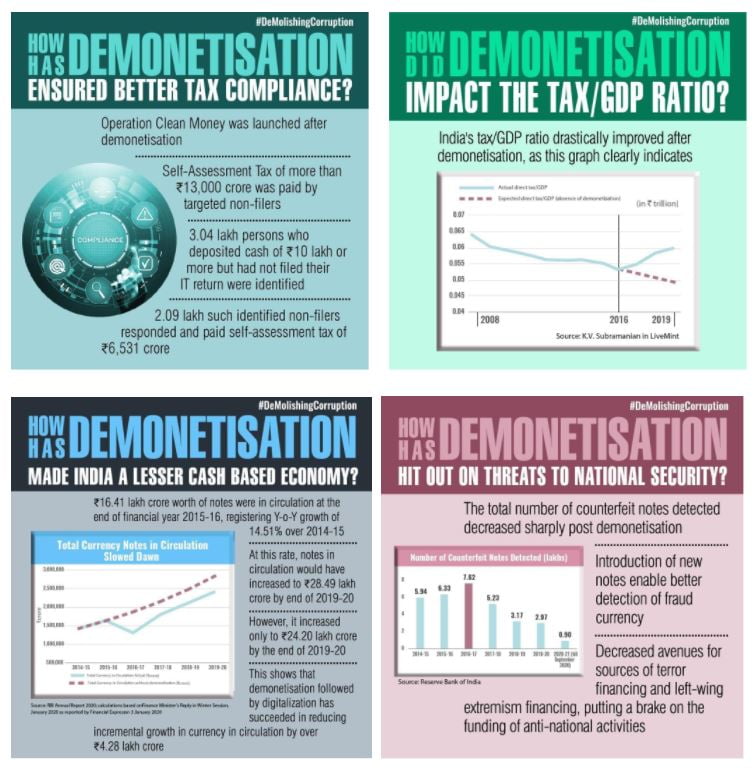 2020 Physics Nobel Laureate Prof. Andrea Ghez had worked closely with Indian astronomers on the design of back-end instruments and possible science prospects of the Thirty Meter Telescope (TMT) project being installed at Maunakea in Hawaii, which can revolutionized the understanding of the universe and the enigmas in it.

Indian scientists have developed an eco-friendly smart screen from groundnut shells that could help not only in preserving privacy but also in energy conservation by controlling light and heat passing through it and reducing air conditioning load.

The device they developed, employed the same principle that causes fog on winter mornings. This happens only when the water droplets are of right size, and it can co-exist along with air. The incoming light sees these two as materials of different refractive indices and thus gets scattered, giving a foggy appearance. Similarly, the polymer and the liquid crystal should co-exist in the right size to create the required optical properties for the smart screen.

The device can be employed for a whole range of possible applications, especially in energy conservation by controlling the amount and window of infrared light that is permitted to pass. For example, while a window having this technology would remain transparent to the entire visible region, undesirable levels of heat radiation could be significantly reduced, keeping the enclosure cool.

National Ayurveda Day: The Ministry of AYUSH, since 2016, has been observing the “Ayurveda Day” every year on the occasion of Dhanwantari Jayanti (Dhanteras).

Vagir, ex-Russia, named after the Sand Fish, a deadly deep sea predator of the Indian Ocean, was commissioned into the Indian Navy on December 3, 1973, and was decommissioned on June 7, 2001, after almost three decades of yeoman service to the nation.

With the launch of Vagir, India further cements its position as a Submarine Building Nation and MDL has more than lived up to its reputation as ‘Warship and Submarine Builders to the Nation’ This is totally in sync with the current impetus of the Government towards ‘Make in India’ and ‘Aatma Nirbhar Bharat’.

Quick Reaction Surface to Air Missile (QRSAM) System has achieved a major milestone by a direct hit on to a Banshee Pilotless target aircraft at medium range & medium altitude. The missile launch took place from ITR Chandipur on 13th Nov 2020 at 1550 hrs off the Odisha Coast.

The missile is propelled by a single stage solid propellant rocket motor and uses all indigenous subsystems. The Missile is canisterised for transportation and launch using a mobile launcher capable of carrying 6 canisterised missiles.

All QRSAM weapon system elements like Battery Multifunction Radar, Battery Surveillance Radar, Battery Command Post Vehicle and Mobile Launcher were deployed in the flight test. The system is capable of detecting and tracking targets on the move and engaging target with short halts. The system is designed to give air defence coverage against strike columns of Indian Army.

The radar tracked the Banshee target from farthest range and missile was launched when target was within kill zone and achieved the direct hit with terminal active homing by RF Seeker guidance. Various DRDO labs DRDL, RCI, LRDE, R&DE(E), IRDE, ITR have participated in the test.

India has Moved from Tax-Terrorism to Tax-Transparency: Prime Minister

The long period of slavery had made the relationship between tax payer and the tax collector that of exploited and exploiters.

Quoting Goswami Tulsidas “बरसत हरसत सब लखें, करसत लखे न कोय तुलसी प्रजा सुभाग से, भूप भानु सो होय” meaning when clouds rain, the benefit is visible to all of us; but when clouds are formed, the sun absorbs the water but does not cause inconvenience to anyone, the Prime Minister said governance should not cause inconvenience when collecting tax from the common people; but when that money reaches the citizens, then people should feel its benefits in their lives.

Over the years, the government has moved ahead with this vision and today’s taxpayer is witnessing huge changes and transparency in the entire tax system.

Ideology should never be put before national interest

Idea-sharing and flow of new ideas should remain uninterrupted

Our country is the land where seeds of different intellectual ideas have sprouted and thrived. It is necessary for the youth to strengthen this tradition. Due to this tradition, India is the most vibrant democracy in the world

Day 34 – Q 1. How does structural discrimination lead to vulnerability? Illustrate.