Part of: Prelims and GS-III -Conservation

Context A petition has been filed in the Supreme Court challenging guidelines issued by the Bombay High Court in cases under the Protection of Women from Sexual Harassment (POSH) Act, which include a blanket bar on parties and advocates from sharing records, including orders and judgments, with the media.

The Protection of Women Against Sexual Harassment at Workplace Act, 2013

Context  Recently, the Union minister for Commerce & Industry has said that India is looking to have a free trade agreement (FTA) with 5 countries – UAE, UK, Australia, Canada and Israel.

What is a free trade agreement (FTA)?

Part of: Prelims and GS I – History

Context Recently, the Vice President of India said that the New Education Policy follows the ‘Nai Talim’ of Mahatma Gandhi by giving importance to the mother tongue as the medium of instruction at the school level.

Mahatma Gandhi gave his scheme of Nai Talim (New Education) in a well-formulated approach to education in 1937 in his newspaper ‘Harijan’.

Unnat Jyoti by Affordable LEDs for All (UJALA)

In News: UJALA completes 7 years of energy-efficient and affordable LED distribution. In a short span, the programme has evolved to be world’s largest zero subsidy domestic lighting programme that addresses concerns like high electrification cost and high emissions that result from inefficient lighting.

Code of Practice for securing consumer Internet of Things (IoT)

Internet of Things (IoT) is one of the fastest emerging technology across the globe, providing enormous beneficial opportunities for society, industry, and consumers. It is being used to create smart infrastructure in various verticals such as Power, Automotive, Safety & Surveillance, Remote Health Management, Agriculture, Smart Homes and Smart Cities etc, using connected devices. IoT is benefitted by recent advances in several technologies such as sensors, communication technologies (Cellular and non-cellular), AI/ ML, Cloud / Edge computing etc.

Context: China is building a bridge across the Pangong Tso within its territory connecting the North and South Banks which will significantly reduce the time for moving troops and equipment between the two sides.

What is the status on the ground in Eastern Ladakh?

What is the importance of the bridge over Pangong Tso? 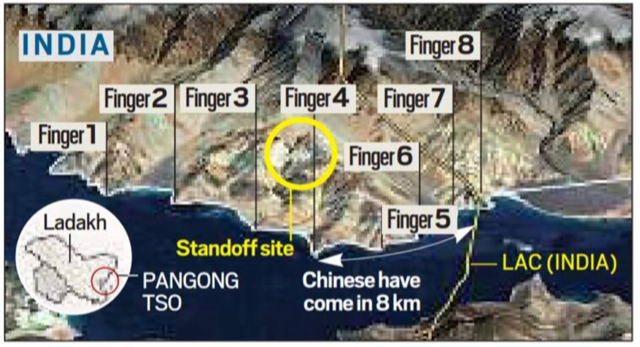 How is India responding to developments on the ground?

What are digital banks?

What is the status of banking sector in India?

What is the suggestion of Niti Aayog?

Observations that support the report

When DTE team visited nine states where hospitalisation rates were high during the pandemic, they found that while the government insurance schemes did not cover all the target groups and eligible individuals, even those enrolled under insurance schemes were forced to fight the pandemic on their own and cough up large amounts of money to avail treatment.

1. Chilika is the world’s largest lagoon.

2. In 1981, Chilika Lake was designated the first Indian wetland of international importance under the Ramsar Convention.

1. FTA is a pact between two or more nations to reduce barriers to imports and exports among them.

2. The concept of free trade gives rise to trade protectionism or economic isolationism.

Q.3 Philosophy of ‘Nai Talim’ was given by Which of the following Historian?