There are approximately 6.6 million refugees across the world today. Amongst them, the Rohingya community from Myanmar is one of the most vulnerable and endangered. Over 900,000 Rohingya people have already been displaced from Myanmar while many remain within the nation as internally displaced person.

Why the Rohingya genocide case has been in the news?

The Rohingya genocide has received considerable attention throughout the world. Two important developments have happened in this regard.

What happened between ‘The Gambia versus Myanmar’ at the ICJ?

ICJ held that Myanmar shall:

ICJ unanimously rejected all the objections.

What is the Historical Background?

The Arakan region (of present-day Myanmar) was a key part of the silk route, which hosted Arab traders since the 8th century AD. Later, a Buddhist kingdom emerged in the region. The Bengal Sultanate also continued in the neighbourhood. After the First Anglo Burmese War, when the Arakan region came under British colonial rule, the migration of low-skilled Bengali workers happened into the region – most of them poor Muslims and a few Hindus. Thereafter, the Arakan region gained a significant Muslim Bengali population. These were the Rohingya people.

By the third Anglo Burmese War, Burma became a part of British India. And the migration of Bengali people multiplied in the region to the extent of threatening the majority Buddhist population. This even led to violent clashes between the two communities. By 1937, Burma had become a separate Crown colony.  Within a few years, the British had to launch their longest military campaign of the Second World War in that very region. The Burma campaign in 1942 was the turning point in the geopolitical history of South Asia, with Britain in direct combat with Japan.

While Britain struggled to protect their control over the colony, Japan promised independence to the Burmese. However, the Rohingya people supported the British as guerrilla fighters and with intelligence against the Japanese. They hoped to gain administrative control over the Arakan region if the British won. Britain lost the war in 1942 and retributive communal violence broke out against the Rohingya Muslim population. By 1944, Burma, disillusioned by the Japanese, resumed their allegiance to the British.

At Burma’s independence from the British in 1948, Arakanese Muslims wanted to join East Pakistan, but Mohammed Ali Jinnah refused. When Bangladesh became independent in 1971, Burma asked Bangladesh to take the Rohingya Muslims, but Bangladesh declined.

What is Rohingya issue?

Though the Rohingyas have been living in the South East Asian country for generations, Myanmar considers them as persons who migrated to their land during Colonial rule. So, it has not granted Rohingyas full citizenship.

Who are Rohingyas?
What is and has been India’s position on Rohingya immigrants?

India has been receiving Rohingya refugees and allowing them to settle in the different parts of the country over the years, especially after the communal violence in the state of Rakhine in 2012. 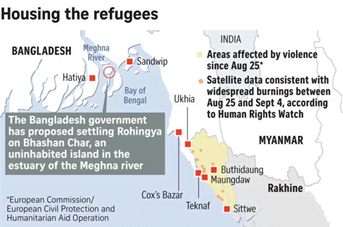 Judges of the court

India at the ICJ

India has been a party to a case at the ICJ on six occasions, four of which have involved Pakistan. They are:

Mains Practice Question –What is the Rohingya Muslims issue? How is it affecting India’s interests and relations with Myanmar? Examine.