The MoUs provide a platform for Indian Railways to interact and share the latest developments and knowledge in the railway sector. The MoUs facilitate exchange of technical experts, reports and technical documents, training and seminars/workshops focusing on specific technology areas and other interactions for knowledge sharing.

The MoU will provide a framework of cooperation for focused approach in following key areas:-

MoU between India and Morocco in the legal field: The MoU will give an opportunity to the Lawyers, Law Officers and law students to discuss issues in the field of law and justice in seminars, symposiums and workshops arranged by authorities of India and Morocco.

MoU between the India and Swaziland on cooperation in the field of Health and Medicine: The MoU covers the following areas of cooperation:-

MoU between India and Suriname for cooperation in the field of electoral management and administration: Including exchange of knowledge and experience in the field of organizational and technical development of electoral process; support in exchanging information, institutional strengthening and capacity building, training of personnel, holding regular consultations etc.

MoU between India and Equatorial Guinea for Cooperation in the field of Traditional Systems of Medicine: The Traditional Systems of Medicine in India are well organized, codified and well documented comprised of Ayurveda, Yoga & Naturopathy, Unani, Siddha, Sowa Rigpa and Homoeopathy. These systems hold tremendous potential in the global health scenario. The Ministry of AYUSH having the mandate to promote, propagate and globalize these Traditional Systems has taken effective steps by entering into MoU with Malaysia,Trinidad & Tobago, Hungry, Bangladesh, Nepal, Mauritius, Mongolia, Iran and Sao Tome & Principe for cooperation in the field of Traditional Medicine.

MoU on Cooperation in the field of Medicinal Plants between India and Equatorial Guinea: India is one of the richest countries in the world in terms of biodiversity, having 15 agro-climatic zones.

MoU between India and Morocco in the field of Mining and Geology: The MoU will provide an institutional mechanism between India and Morocco for cooperation in the field of geology and mining. The activities involved in the cooperation viz. development of geological infrastructure, promotion of mining and geology, training programs and establishment of geological data bank would serve the objective of innovation.

Appropriate Pricing: Farmers are at a risk of not getting appropriate price for their produce during the surplus production phase. Taking this into account, the Policy allows use of surplus food grains for production of ethanol for blending with petrol with the approval of National Biofuel Coordination Committee.

Funding Scheme: With a thrust on Advanced Biofuels, the Policy indicates a viability gap funding scheme for 2G ethanol Bio refineries of Rs.5000 crore in 6 years in addition to additional tax incentives, higher purchase price as compared to 1G biofuels.

Roles and responsibilities of all the concerned Ministries/Departments with respect to biofuels has been captured in the Policy document to synergise efforts.

Reduce Import Dependency: One crore lit of E10 saves Rs.28 crore of forex at current rates. The ethanol supply year 2017-18 is likely to see a supply of around 150 crore litres of ethanol which will result in savings of over Rs.4000 crore of forex.

Cleaner Environment: One crore lit of E-10 saves around 20,000 ton of CO2 emissions. For the ethanol supply year 2017-18, there will be lesser emissions of CO2 to the tune of 30 lakh ton. By reducing crop burning & conversion of agricultural residues/wastes to biofuels there will be further reduction in Green House Gas emissions.

Health benefits: Prolonged reuse of Cooking Oil for preparing food, particularly in deep-frying is a potential health hazard and can lead to many diseases. Used Cooking Oil is a potential feedstock for biodiesel and its use for making biodiesel will prevent diversion of used cooking oil in the food industry.

MSW Management: It is estimated that, annually 62 MMT of Municipal Solid Waste gets generated in India. There are technologies available which can convert waste/plastic, MSW to drop in fuels. One ton of such waste has the potential to provide around 20% of drop in fuels.

Additional Income to Farmers: By adopting 2G technologies, agricultural residues/waste which otherwise are burnt by the farmers can be converted to ethanol and can fetch a price for these waste if a market is developed for the same. Also, farmers are at a risk of not getting appropriate price for their produce during the surplus production phase. Thus conversion of surplus grains and agricultural biomass can help in price stabilization.

Aim: Promote biofuels in the country

By: Ministry of New and Renewable Energy during the year 2009

Biofuels in India are of strategic importance as it augers well with the ongoing initiatives of the Government such as Make in India, Swachh Bharat Abhiyan, Skill Development and offers great opportunity to integrate with the ambitious targets of doubling of Farmers Income, Import Reduction, Employment Generation, Waste to Wealth Creation. Biofuels programme in India has been largely impacted due to the sustained and quantum non-availability of domestic feedstock for biofuel production which needs to be addressed.

1G: Most common first-generation biofuels include:

Biodiesel – extraction of vegetable oils, with or without esterification, from the seeds of plants like soybean, rape (canola) and sunflower

2G: Second-generation non-food feedstocks include woody crops and agricultural residues or waste, which are a little more difficult to extract. For this reason, advanced conversion technologies are needed in the process, which is also why second-generation biofuels are known as “advanced biofuels.”

Higher yields: Algae is capable of producing much more than its other feedstock counterparts, and with lower resource inputs. By some estimates, algae can produce 10-fold what even the best conventional feedstocks can generate.

The capital and operating costs of third-generation production are the highest. This subsector requires additional research and development to reach the point of being a sustainable method of consistent biofuel production on a commercial scale, but the potential is highly promising

4th generation biofuel (4G): Made from specially engineered plants or biomass – to:

Realizing the need for developing the green skills, the Ministry of Environment, Forest & Climate Change (MoEF&CC) is utilising the vast network and expertise of Environmental Information System (ENVIS) hubs and Resource Partners (RPs).

Aims to: Get 80, 000 people imparted green skills and in filling the skill gaps in the environment sector

The number of people to be employed under GSDP will be increased to cover 2.25 lakh people next year and to about 5 lakh people by the year 2021

It will help in the attainment of the Nationally Determined Contributions (NDCs), Sustainable Development Goals (SDGs), National Biodiversity Targets (NBTs), as well as Waste Management Rules (2016).

The demand for aviation skilled personnel has been rising commensurately with the boom in the civil aviation sector witnessed in the last 3-4 years. Recognizing this demand and to bolster the Skill India Mission, Shri Suresh Prabhu made the following observations:

Recognizing the need for increasing air cargo industry size in India, the Sh. Prabhu made the following observations:

By: Ministry of New and Renewable Energy

Mascot IP Nani is a tech-savvy grandmother who helps the government and enforcement agencies in combating IP crimes with the help of her grandson “Chhotu” aka Aditya. The IP mascot will spread awareness about the importance of Intellectual Property Rights (IPRs) among people, especially children, in an interesting manner.

This character is also in line with the World Intellectual Property Organization’s (WIPO) campaign for the World IP Day which celebrates the brilliance, ingenuity, curiosity and courage of the women who are driving change in our world and shaping our common future. It also highlighted that how a strong IP system can support innovative and creative women and indeed everyone in their quest to bring their amazing ideas to the market.

Objective of National IPR Policy: IPR Awareness: Outreach and Promotion”. Under this objective, one of the key focus areas is awareness on IPR for school children, as it is essential to nurture creativity and the ability to innovate starting out from a young age. 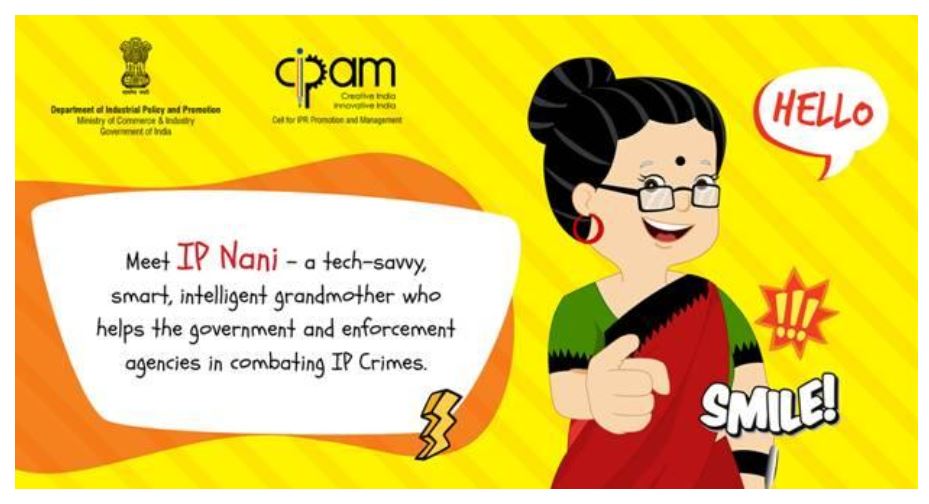 Establishment of National Institute of Mental Health Rehabilitation at Bhopal

National Geoscience Awards: Started in 1966 by the Ministry of Mines

Atal Pension Yojana: Subscribers base crosses 1 crore mark on completion of 3 years of launch of the Scheme

India participates for the first time at the Meeting of Cultural Ministers of the SCO held in Sanya, Hainan province, China

The main objectives of the SCO are to strengthen relations among member states; promote cooperation in various fields like political affairs, economics, and education, culture, tourism, environment protection etc. and promote regional peace, security, and stability among others. India attaches special importance to SCO in promoting multilateral, cultural, political, security, economic and people-to-people interaction in the region.

Swachh Bharat and Swastha Bharat must be mass movement

HIRA: NITI Aayog has recently launched the ‘NITI Forum for the North East’ which envisages that development projects in the NER will be based on the concept of “HIRA” (Highways, Inland Waterways, Railways and Airways)