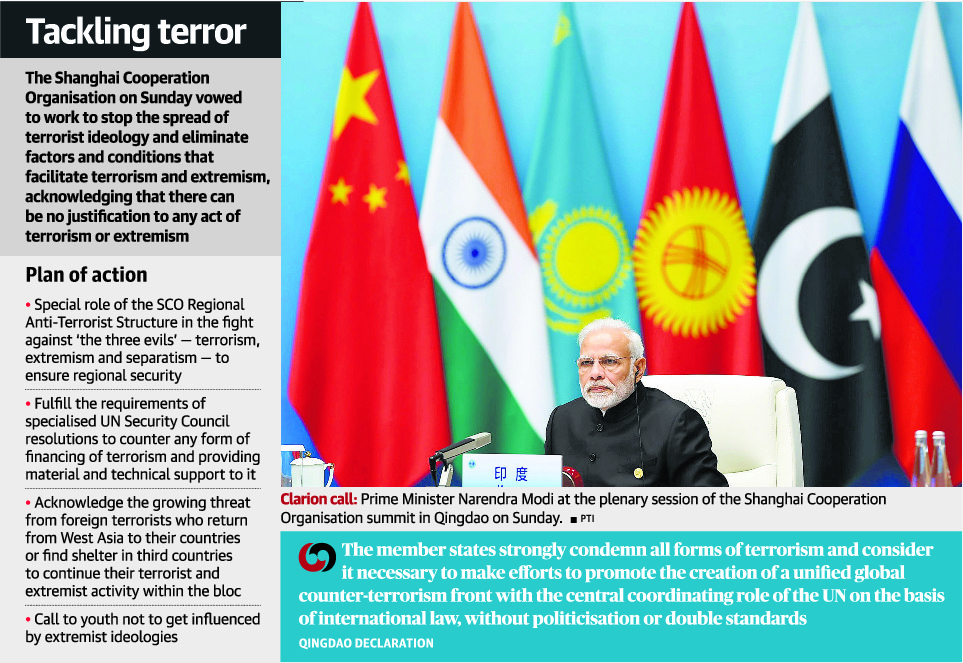 PM Modi also spelt out his new mantra applicable to the SCO, which he termed as SECURE:

Part of: Prelims and Mains GS Paper II and III – International relations; India and the World; Defence and Security

India is instituting a series of bilateral and multilateral naval exercises with Association of South East Asian Nations (ASEAN) countries as part of the increasing military-to-military cooperation.

This is in addition to assisting the countries in capacity-building and sale of military hardware.

As per a report- Official figures say 62 per cent of land claims made by tribals were rejected in Maharashtra.

Such rejection, though not uncommon, is against the spirit of The Scheduled Tribes and Other Traditional Forest Dwellers (Recognition of Forest Rights) Act, 2006 (FRA).

The Act vests a number of rights with forest-dwelling communities, including rights over forest land for habitation and cultivation, right of ownership, access to collect, use, and dispose of minor forest produce, right to govern and manage any community forest resource which they have been traditionally conserving for sustainable use.

Historically, during the colonial and post-colonial periods, forest management and access to forest resources like non-timber forest products (NTFPs) was largely driven by the principles of centralisation, exclusion and exploitation.

The FRA envisages to change this and ensure that the economic benefits of NTFPs accrue to tribal people — this is one reason that claims on forest resources should be addressed without bias.

Importance of the NTFPs:

The report of the sub-group on NTFPs and their sustainable management in the 12th Five Year Plan highlighted that NTFPs constitute one of the largest unorganised sectors in India. Almost 275 million people depend on NTFPs with a turnover of at least Rs 6,000 crore per annum.

There is a strong potential to scale up NTFP collection and processing.

However, NTFPs potential as a source of development and poverty alleviation has been deeply neglected.

Role of the FRA:

Prior to the enactment of the FRA in 2006, forest laws nationalised non-timber forest produce and regulated the market process, creating severe inefficiencies.

The FRA provides the legal basis of ownership rights over NTFPs to forest dwellers.

The remarkable impact of ownership rights over these forest products in terms of incomes and empowerment can be observed in Maharashtra’s Vidarbha region.

In the region, the community rights under FRA have been implemented at scale, with almost 5.86 lakh hectares of forests being transferred to the jurisdiction of gram sabhas.

There is a significant change in their socio-economic condition due to the additional income from NTFPs.

These are remarkable developments, wherein recognition of rights over forests and forest products seem to have kick-started a process of economic development and empowerment in one of the poorest, left-wing extremist affected parts of India.

Positive developments due to the FRA:

For instance, in the Vidarbha region, the recognition of community rights over forest resources and land has led to dramatic reduction in incidence of forest fires. The forest cover regeneration has improved and indiscriminate felling and diversion of forests has been contested.

Unfortunately, above mentioned positive developments have been largely confined to Vidarbha, a few villages in Kalahandi district of Odisha and Gujarat’s Narmada and Dangs districts.

A report of the Rights and Resources Initiative (2015) suggests that if the FRA is implemented properly, it could lead to the recognition of the rights of at least 150 million forest-dwelling people over 40 million hectares of forestland in more than 1,70,000 villages. The economic impact of this could be huge in rural areas as NTFPs constitute about 20 per cent to 40 per cent of the annual income of forest dwellers.

It provides them critical subsistence during the lean seasons, particularly for tribal groups such as hunter-gatherers, and the landless. Given that most of the NTFPs are collected, used and sold by women, it would also lead to financial and social empowerment for millions of women.

The new wave of a technological revolution will not be from pure data or access to consumer behaviour, but the application of data and their assimilation with solving social problems, enabling better governance and powering elected governments to serve their citizens better.

This “datafication” of businesses has also brought to the fore the criticality of developing data management, storage and privacy laws.

If the advent of data-driven business models was a watershed moment, this is the real pot of gold. Unfortunately, the potential of this national asset is being grossly underutilised.

The Ministry of Electronics and Information Technology has made some laudable efforts, including a policy around open data.

Completeness would imply a data set. For example, soil data cards will have data on all relevant aspects as well as current emerging technologies such as Blockchain and the Internet of Things to provide the opportunity to automate data collection.

The time is now ripe for the government to create a data-driven governance architecture by building digital trust in the economy and its intent.

Q.1) The Qingdao Declaration is related to which of the following organsiations:

Q.2) ‘Regional Anti-Terrorist Structure’ is associated with which of the following organsiations:

Q.3) Coordinated Patrol (CORPAT) is associated with which of the following countries:

Draw the line for the speakers and governors