Part of: GS Prelims and Mains – Environment and ecology; Pollution

Performance (according to latest CPCB report)

Article link: States’ claim on fighting plastic only strong on paper – The Hindu

In our previous article [Shifting taxonomy of violence], we read that –

India is witnessing saga of violence and conflicts.

Also adding to above list, were the escalating violence resulting from caste conflicts, such as –

All the above issues had resulted in highly complex violence (police firings, death of over a dozen individuals, etc) and needed careful attention.

The article stressed the need for redefining the internal security landscape and for new methods to deal with the above new-era protests. (You can revise previous article by clicking this link – Shifting taxonomy of violence)

Apart from above incidents there are other episodes of mass communal violence – recurring incidents of lynching and targeted mob violence against vulnerable groups – have been reported from various parts of the country.

These recurring incidents are a direct challenge thrown by right-wing groups to political processes, especially electoral processes and the rule of law. (what we can all as ‘vigilante violence’)

**Vigilantism – law enforcement undertaken without legal authority by a self-appointed group of people.

Vigilantism, at its peak?

South Asia has a long history of communal violence, but these were primarily big episodes of mass violence.

This has now given way to a smaller-scale of conflict and vigilante violence against individuals endorsed by state inaction.

Are minorities under siege?

According to the Citizens Against Hate (CAH), a civil society group report – 97% of cow-related lynchings had occurred since the Bharatiya Janata Party’s (BJP) rise to political dominance in 2014.

Most of these attacks were based on rumours sparked by accusations, often circulating on social media which take the shape of communal stereotypes of victims.

Most actors leading the charge are suspected to belong to right-wing parties who are backed by political protection.

Apart from the political reasons alluded to above, the rising trend is directly related to the ‘intensification of communal polarisation’ and ‘instrumentalisation of prejudice’ for political ends apparent in various government attempts to infuse religion into politics and education.

In the event, these acts seem to have acquired a certain degree of legitimacy in the public mind.

As hate crimes grow, so does the sense of impunity or licence/freedom enjoyed by the actual perpetrators to continue such injurious crimes increases. Lack of justice for victims further reinforces the vicious cycle of impunity.

The lack of public reaction to such incidents implies a degree of acceptability of violence as an expression of vengeance against ‘injustices’ suffered by Hindus in the past. The theory of ‘Hindu insecurity’ and ‘Hindu persecution’ comes at a time when political representation of Muslims in legislatures and administration and their presence in the public sphere is at its lowest since Independence.

Most of the incidents are not spontaneous acts of violence; there is usually systematic planning behind them.

Has active support of powerful political figures in the current establishment at the Centre and in the States has helped to build networks, gain new recruits, resources and legitimacy that right-wing groups did not have in the past?

Preventing further atrocities requires respect for the rule of law and legal institutions and strong prosecutions and expeditious punishments. Unless checked, it can cause irreversible harm to the social fabric of our society and to the tenets of democracy that have shaped and sustained the idea of India.

Growing hate crimes and vigilante violence needs reforms in our existing laws and legal procedures. Do you agree? Critically examine.

The United Nations Educational, Scientific and Cultural Organization (UNESCO) seeks to encourage the identification, protection and preservation of cultural and natural heritage around the world considered to be of outstanding value to humanity. This is embodied in an international treaty called the Convention concerning the Protection of the World Cultural and Natural Heritage , adopted by UNESCO in 1972.

(i) to represent a masterpiece of human creative genius;

(ii) to exhibit an important interchange of human values, over a span of time or within a cultural area of the world, on developments in architecture or technology, monumental arts, town-planning or landscape design;

(iii) to bear a unique or at least exceptional testimony to a cultural tradition or to a civilization which is living or which has disappeared;

(iv) to be an outstanding example of a type of building, architectural or technological ensemble or landscape which illustrates (a) significant stage(s) in human history;

(v) to be an outstanding example of a traditional human settlement, land-use, or sea-use which is representative of a culture (or cultures), or human interaction with the environment especially when it has become vulnerable under the impact of irreversible change;

(vi) to be directly or tangibly associated with events or living traditions, with ideas, or with beliefs, with artistic and literary works of outstanding universal significance. (The Committee considers that this criterion should preferably be used in conjunction with other criteria);

(viii) to be outstanding examples representing major stages of earth’s history, including the record of life, significant on-going geological processes in the development of landforms, or significant geomorphic or physiographic features;

(ix) to be outstanding examples representing significant on-going ecological and biological processes in the evolution and development of terrestrial, fresh water, coastal and marine ecosystems and communities of plants and animals;

(x) to contain the most important and significant natural habitats for in-situ conservation of biological diversity, including those containing threatened species of outstanding universal value from the point of view of science or conservation. 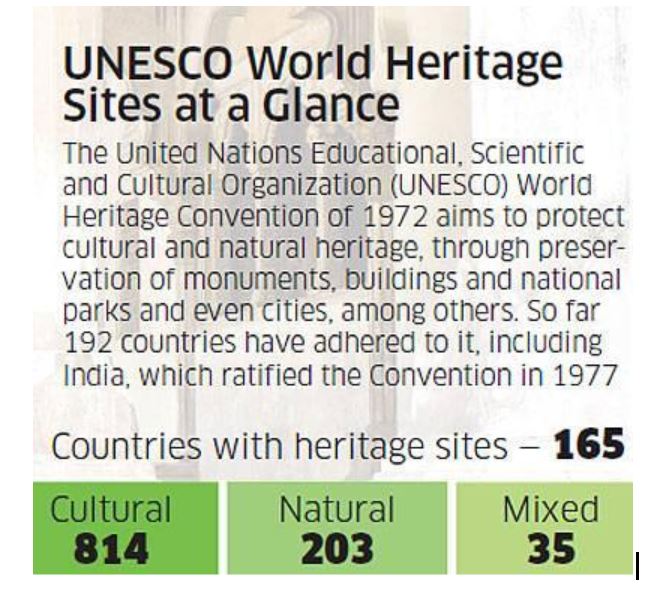 Q.1) Assumption island is located in –

Q.2) Ambubachi Mela, a festival to mark the menstrual period of the goddess is celebrated in –

Q.3) Ellora caves are one of the World Heritage sites in India. Which of the following statements are correct about ‘Ellora caves’?

Q.4) In the Constitution of India, the provision ‘to value and preserve the rich heritage of the country’s composite culture’ is included in the:

At the heart of the Silk Road