India is a popular hub for medical tourism

India attracts a large number of foreign patients every year.

Bangladesh and Afghanistan continued to be the top countries from where the maximum number foreign tourist arrivals (for medical purpose) was seen.

Other countries from where large numbers of medical tourists came to India include Iraq, Oman, Maldives, Yemen, Uzbekistan and Sudan.

The NITI Aayog has identified medical value travel as a major source of foreign exchange earnings. 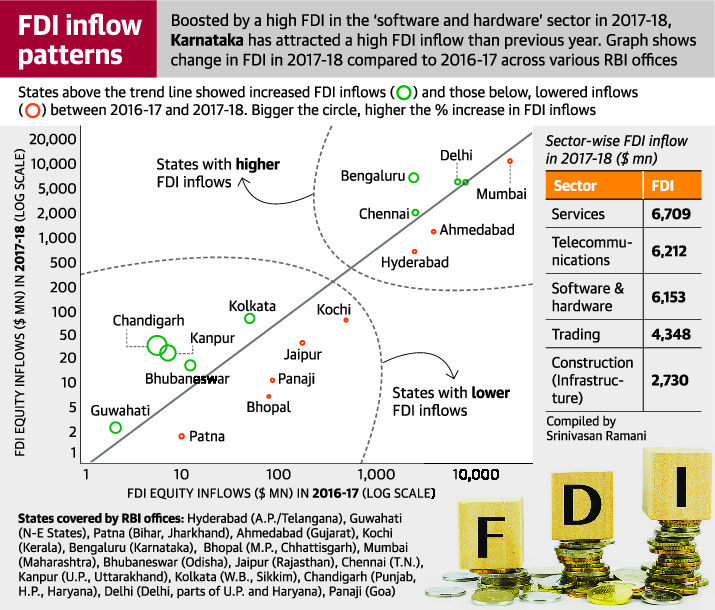 Determinates of FDI in Host Country:

Section 377 reads as follows: “Whoever voluntarily has carnal intercourse against the order of nature with any man, woman or animal, shall be punished with imprisonment for life, or with imprisonment of either description for a term which may extend to ten years, and shall also be liable to a fine.”

The terms “carnal intercourse” and “against the order of nature” are not defined precisely anywhere in the code.

It had led to – wide variety of definition and misinterpretations of the law – in most of the cases during British India and independent India.

In summary, the Delhi high court found Section 377 to be unconstitutional.

One side (the literalists) holds that Parliament must enact laws that the judiciary should enforce, and, therefore, it is up to Parliament to change the law.

The other side (the pragmatists) has always maintained, as the incumbent government just stated, that the courts must opine if Parliament is unable or unwilling to modernize a 150-year-old law.

Though the 172nd report of the Law Commission of India recommended the deletion of Section 377, no action was taken.

Earlier this month, the Supreme Court began to hear a clutch of appeals challenging the constitutional validity of Section 377.

According to the new bench –

Section 377 criminalises a section of people for being a sexual minority. A cross-section of the people has approached the Supreme Court against the penal provision. They are not just seeking protection as sexual minorities, but recognition of characteristics inherent in all human beings. They argue that the right to sexuality, sexual autonomy and freedom to choose a sexual partner form the cornerstone of human dignity. Section 377 has a “chilling effect” on the right of equality, liberty, life, dignity and non-discrimination on the ground of sex.

The pertinent question before the court is, what is the ‘order of nature’ meant by Section 377 in its text. Once the Constitution Bench decides that homosexuality is also an order of nature and upholds the fundamental right to sexuality, sexual orientation and choice of same-sex partners, the doors are opened for individuals to approach the court in future on the larger issues of legalising same-sex marriages, inheritance, adoption, and reservation in employment.

The Constitution of India mandates Central Government to take steps for coordination and determination of standards in institutions for higher education or research and scientific and technical institutions.

For promoting uniform development of quality of education in higher educational institutions, there is a need for creation of a Body that lays down uniform standards, and ensures maintenance of the same through systematic monitoring and promotion.

The existing regulatory structure as reflected by the mandate given to University Grants Commission required redefinition based on the changing priorities of higher education and allows its growth.

Flaws in the proposed Higher education commission of India bill

The default status of a good university is to be autonomous. The spirit of Clause 15 (3) of the draft Act is no different to Section 12 of the UGC Act where wide powers are given to the Commission.

The standards laid down by regulators are applied to all the universities but they cater to only institutions at the bottom of the period. That is the reason why the IITs, IIMs and other good institutions suffer at the thought of UGC control.

The draft bill for the National Commission for Higher Education and Research (NCHER) 2012 had proposed a separate autonomous body for allocations of funds. It would have been good step if the current draft took that into consideration instead of MHRD handling the funds.

National Knowledge Commission and Yashpal Committee had, in 2008, recommended the setting up of a single regulatory authority. Presently, there are 13 regulators in the area of higher education, each functioning independently and often times issuing contradictory regulations. For ex- The draft act does not mention about the regulator for technical education

Accreditation is an important tool for quality improvement in learning outcomes. National Accreditation Regulatory Authority Bill in 2012 had proposed for creating an autonomous accrediting agency but the draft bill attempts to establish as a subordinate body.

UGC Act specifies that degrees can be awarded only by a university deemed to be a university and an institution specially empowered by Parliament in this behalf. The present draft removes that restriction and by virtue of authorisation by UGC, any higher education institution in India, whether university or not, can become entitled to award diploma, degree etc. This could lead to a free-for-all situation.

The present UGC Act empowers it under Section 22 (3) to define a degree, including its duration and nomenclature. The present draft removes that provision which can create chaos as different authorities will be free to give different nomenclature to a degree/diploma with variable duration.

The draft allows any university, including private and deemed-to-be-universities, to affiliate. This could lead to an unhealthy competition and scramble for colleges for affiliation, especially by private universities, for purely commercial reasons.

The skill programmes and courses are terminal in nature and given the stigma that society unfortunately attaches to working with the hands, it has failed to get mass acceptability. The draft could have provided more powers to the Commission in mainstreaming skills into the education system.

Online education and blended learning are the order of the day and probably also of the future.

Madhav Menon Committee had recommended open and distance learning in place of highly capital intensive conventional class room education. The present draft has retained that provision which is a good sign going ahead with the much needed reforms.

Q.1) Which among the following is/are part of  State Subject?

Q.2) Consider the following statements with reference to the Foreign Direct Investment

Q.3) Which among the following statements is/are true in regard to FDI and FII?

Q.4) Which among the following is/are matched correctly?

Changing the order of battle

The art of writing a judgment

The deep and far of science

A Law For Children