Launch of historic Support and Outreach Initiative for MSME sector

12 key initiatives which will help the growth, expansion and facilitation of MSMEs across the country were unveiled, under the 5 key aspects mentioned above –

Must Read: New classification of the MSMEs

Agreement between India and Morocco on Mutual Legal Assistance in Criminal Matters: The Agreement will provide a broad legal framework for bilateral cooperation between India and Morocco in investigation and prosecution of crime, tracing, restraint, forfeiture or confiscation or proceeds and instruments of crime. It aims to increase effectiveness in investigation and prosecution of crime, and in providing the necessary peaceful ambience which is a pre-requisite for the development of society as a whole. It will further be instrumental in gaining better inputs and insights in the modus operandi of organized criminals and terrorists, which in turn can be used to fine-tune policy decisions in the field of Internal Security.

MoU between India and Korea for strengthening cooperation in the field of Tourism:

Moving a Resolution in the first Assembly of the International Solar Alliance (ISA) for amending the Framework Agreement of the ISA for opening up the ISA membership to all countries that are members of the United Nations:

Latest country to have decided to join the International Solar Alliance: Botswana

World’s tallest statue: Statue of Unity, India – a 182 metre statue of Sardar Vallabhbhai Patel – the integration of India by Sardar Patel, has resulted today in India’s march towards becoming a big economic and strategic power. 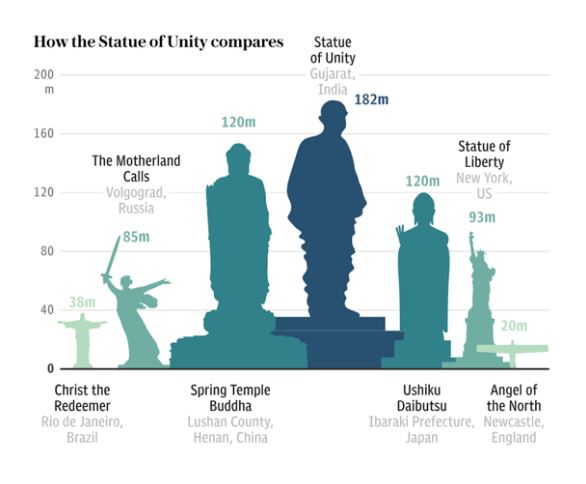 President gives assent to promulgation of the Companies Amendment (Ordinance), 2018: For

India’s Ranks in Ease of doing Business: As per the World Bank report 2019 on Ease of Doing Business, India has taken a huge leap of 23 ranks from 100 in 2017-18 to 77 in 2018-19 indicating it is continuing its steady shift towards global standards.

One of the key indices which has contributed immensely toward this growth is ‘Trading across borders’ which shows an impressive improvement from 146 rank last year to 80th rank this year. The Ministry of Shipping has been taking initiatives to improve the parameter of ‘Trading across border’ as 92% of India’s Export- Import trade by volume is handled at ports.

The report mentions that this is mainly due to India’s continued reform agenda, which has made it the top-ranked economy in the region:

The Government has initiated a series of steps to make India’s EXIM logistics more competitive in terms of time and cost. The focus has been on development of port infrastructure and capacity enhancement, improvement in last mile connectivity and development of multi-modal hubs to promote EXIM while reducing logistics cost and time. Under Sagarmala, port-led-development initiative of the Govt, 266 port modernization projects with an investment of more than Rs 1.45 lakh Crore has been identified for implementation over next 10 years

Indian Navy’s Deep Submergence Rescue Vessel (DSRV) Capability: This System has a Side Scan Sonar for locating the position of the submarine in distress at sea, providing immediate relief by way of posting Emergency Life Support Containers with the help of Remotely Operated Vehicle (ROV) and thereafter rescuing the crew of the submarine using the DSRV itself.

With this capability, India has joined a select league of nations which have this unique capability and we are now in a position to not only provide rescue cover to our own submarines but also to other friendly nations in the IOR and beyond. Our vision is to emerge as a centre of regional excellence for Submarine Rescue Services in line with the stature of our great nation.

NMCG & UN Habitat organize a policy dialogue – Urban Cafe: ‘River for Habitat’ on this occasion and discussed the deep association that rivers have with various aspects of human civilization – our cities, our economy and various facets of our  daily lives, the challenges to maintaining healthy river ecosystems and ways to deal with the same.

India’s first ease of Mobility Index: The Index offers a source of information to aid transit agencies and urban planners to make informed decisions and align solutions with the preference of commuters. The report has been prepared by Ola Mobility Institute – Ola’s research and social innovation arm.

UDAN scheme: UDAN is an innovative scheme to develop the regional aviation market. It is a market-based mechanism in which airlines bid for seat subsidies.

Solve: Critically examine the significance of regional connectivity for a developing economy like India. Also discuss the features of the UDAN scheme launched by the government.

Atal Pension Yojana (APY): Guaranteed Pension Scheme of Government of India administered by PFRDA. The Subscriber base under APY has crossed 1.24 crore mark.

Mahatma Gandhi National Rural Employment Guarantee Act (MGNREGA): a demand driven and additional resources will be made available as and when required to ensure that no one is denied work on demand.  Adequate steps have been taken to ensure timely payments and mobilization of additional resources when required. Reforms in the programme over the last 3 years have substantially improved the quality of durable assets and convergence for effective livelihood diversification.