The State has been advised to follow the National Vector Borne Disease Control Program (NVBDCP) guidelines of personal protective measures to prevent mosquito bites. The Ministry has also recommended vector surveillance and control to be carried out in coordination with NVBDCP.

West Nile Fever is a mosquito borne zoonotic disease caused by a flavivirus -West Nile Virus (WNV). This virus is related to viruses that cause Japanese Encephalitis, yellow fever and St. Louis encephalitis. Human infection is most often due to bites from infected mosquitoes. To date, no human-to-human transmission of WNV through casual contact has been documented. Infection with WNV is either asymptomatic (no symptoms) in around 80% of infected people, or can lead to West Nile fever or severe West Nile disease. 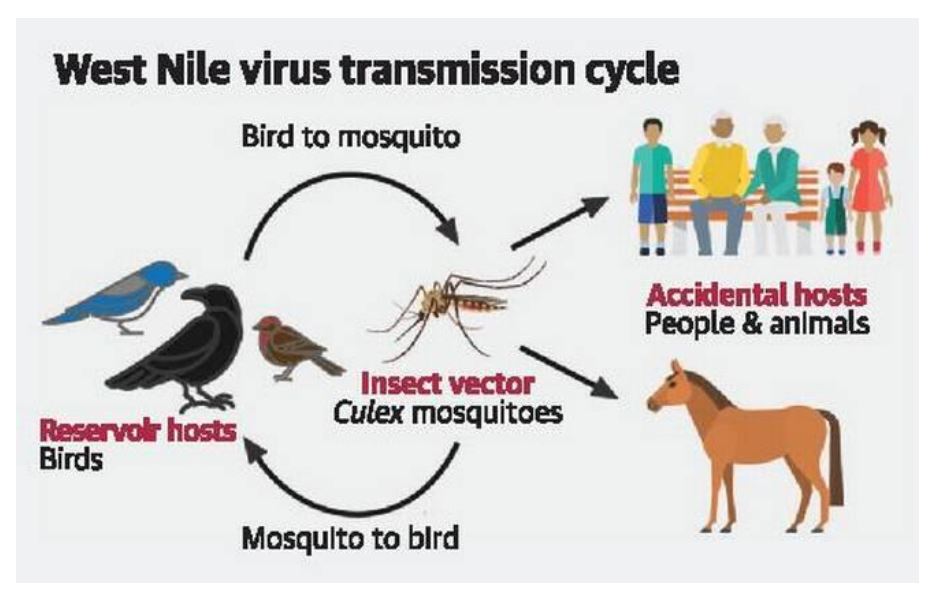 600 million people face acute water shortage and 200,000 die each year because they have no access to clean water. By 2020, 21 cities will run out of groundwater. Just over a decade from now, water woes could cause a 6% loss in GDP.

What is ‘safe water’?

Safe water means water that is free from contamination, and available whenever needed. The world cannot grow and prosper if there are people without access to safe water. When they are forced to use unsafe or contaminated water, they risk contracting deadly diseases.

Women, children, refugees, and disabled people sometimes face discrimination when they try to access water. This is against the basic human right to water — which entitles everyone to water for drinking, personal sanitation, washing clothes, food preparation, and household hygiene. This year’s World Water Day will focus on the reasons why so many people are being left behind.

Composite Water Management Index: Seventy per cent of the water resources in the country is polluted, 75 per cent households do not have drinking water and more than 600 million people in the country face high to extreme water distress.

The Mihir Shah Committee argued that there is little “understanding of river systems or their interconnections with the health of catchment areas or groundwater”. There needs to be a paradigm shift in the country’s water governance: From a predominantly engineer-centred approach of the CWGB to one involving hydrologists, geologists, agronomists, and ecologists.

Water scarcity is a clear and present danger, not a distant threat, and global warming heightens this threat.

24th March marks the day in 1882 when Dr Robert Koch announced that he had discovered the bacterium that causes TB, which opened the way towards diagnosing and curing this disease.

TB remains the world’s deadliest infectious killer. Each day, nearly 4500 people lose their lives to TB and close to 30,000 people fall ill with this preventable and curable disease.

Global efforts to combat TB have saved an estimated 54 million lives since the year 2000 and reduced the TB mortality rate by 42%. To accelerate the TB response in countries to reach targets – Heads of State came together and made strong commitments to end TB at the first-ever UN High Level Meeting in September 2018.

Theme of World TB Day 2019 – ‘It’s time’ – puts the accent on the urgency to act on the commitments made by global leaders to:

Private Sector: The private sector has a very crucial role to play in checking the rise of TB as it is the first place a patient from an urban area visits. We need to make them a partner in this fight.

Strengthening research: We urgently require rapid and cost-effective point-of-care devices that can be deployed for TB diagnosis in different settings across the country.

Technology: Technology has to be introduced and utilized in the most effective manner to ensure early access and monitoring.

Ending social stigma: TB is not a health issue alone. It is a broader societal challenge. Patients often hesitate to seek treatment or deny their condition altogether for fear of losing social standing. The consequence is that TB becomes a death sentence for many even though it is a fully curable illness. Women are disproportionately affected with estimates suggesting that 100,000 Indian women are asked to leave their homes every year after being diagnosed with TB.

Shift to Daily regime of medication: With DOT Centres, the treatment will be at individual door level leading to no defaulter.

Will this work: Need to incentivise both the patients and the private practitioners as both the sides will ensure that they stand to gain from the treatment, which, in the long term, might lead to behavioural change.

Web-based Application – Nikshay: To enable health functionaries at various levels across the country to monitor TB cases in their areas

Introduction of Cartridge-Based Nucleic Acid Amplification Test (CBNAAT): It is a revolutionary rapid molecular test which simultaneously detects Mycobacterium tuberculosis and rifampicin drug resistance. This test is fully automated and provides results within two hours. It is a highly sensitive diagnostic tool and can be used in remote and rural areas without sophisticated infrastructure or specialised training.

(Topic: Security challenges and their management in border areas; linkages of organized crime with terrorism)

On Media and Elections