Open up the Supreme Court

The issues under consideration involved –

The following should be our stand on some questions/areas:

Does the Office of the CJI come under the purview of RTI Act?

Would bringing the judiciary under the RTI Act destroy the personal privacy of judges?

On disclosure of the correspondence of the Collegium

We are aware of “National Judicial Appointments Commission”, which was suggested as an alternative to Collegium system. But NJAC was struck down by the SC in 2015.

Why was NJAC struck down by the SC?

Except India, judicial appointments elsewhere suggest that transparency in appointments is integral to the process.

The public, thus, is in a position to judge for itself the selection process. This is crucial to maintaining public faith in the impartiality of the institution.

However, in India, the Collegium has immunised itself from any form of public scrutiny. The nomination process is secret, the deliberations are secret, the reasons for elevation or non-elevation are secret. This had led to extremely unhealthy climate, in which rumours become staple, and whispers about executive interference are exchanged in court corridors.

In the name of transparency, one should not destroy an institution.

A judiciary that is confident of itself and of its place in the democratic republic should not be worried about subjecting judicial appointments to public scrutiny.

Key points from the editorial –

(* Thilafushi is an artificial island created as a municipal landfill situated to the west of Malé. Thilafushi originally was a lagoon called “Thilafalhu”)

Importance of India to Maldives:

Why Maldives is important for India? 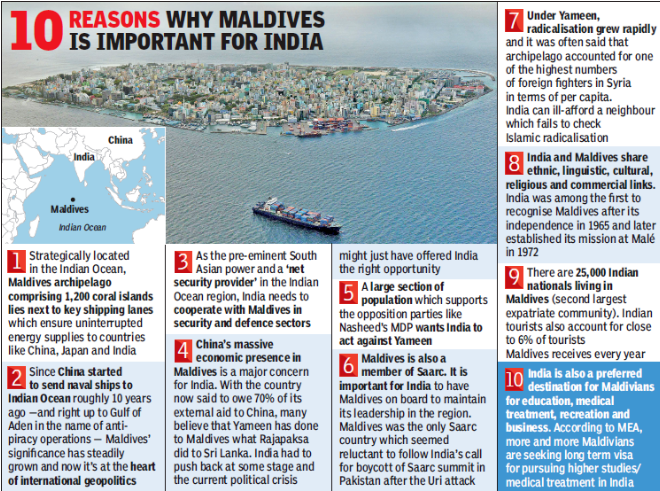 Q.1) Thilafushi island was in news. It is situated in –

Q.2) Mission Shakti is associated with –

Playing politics over the Golan Heights

US vs Europe in India

The Pune plan for China