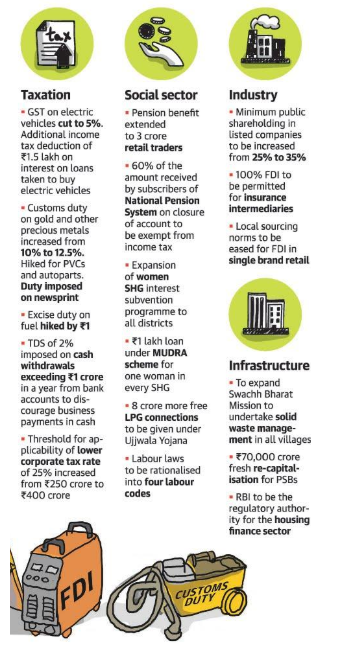 Aadhaar can be interchanged with PAN for filing tax returns

RBI can supersede NBFC board

From a modest beginning in the 1960s, India’s space programme has grown steadily, achieving significant milestones. These include fabrication of satellites, space-launch vehicles, and a range of associated capabilities.

Since its establishment in 1969, ISRO has been guided by a set of mission and vision statements covering both the societal objectives and the thrust areas.

A new Space law for India should aim at facilitating growing India’s share of global space economy to 10% within a decade which requires a new kind of partnership between ISRO, the established private sector and the New Space entrepreneurs.

ISRO has completed 50 years of its journey in India’s space research and explorations. Explain briefly its achievements. Suggest some measures for its way ahead.

Q.1) Consider the following statements regarding The Union Budget 2019-20

Budget is well-intentioned on the big themes. But execution will be key

Reclaiming the space of non-violence