Context A study done by researchers of the Indian Institute of Technology-Madras(IIT-M) has found that contaminants, including pharmaceutically active compounds, personal care products, plastics, flame retardants, heavy metals and pesticides, pollute the Cauvery. 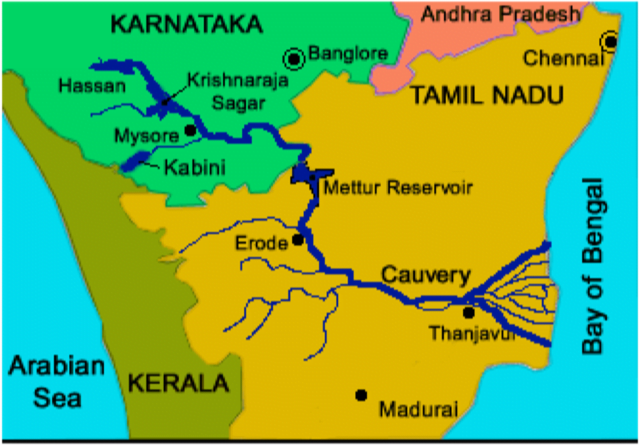 Context Supreme Court has allowed girls to appear in the entrance examination scheduled for December 2021 for admission to the Rashtriya Indian Military College (RIMC).

Part of: Prelims and GS I – Art and culture and GS-III – Tourism

Indian forces to carry out exercise with U.K.

Context India’s armed forces are scheduled to carry out an exercise with the U.K.’s Queen Elizabeth carrier strike group later this month (October).

Other developments between India and UK

In News: India has joined the High Ambition Coalition for Nature and People, a group of more than 70 countries encouraging the adoption of the global goal to protect 30×30.

Sources of aerosols in the central Himalayan region

With a unique role in the Asian climate, the Himalayan region is considered a vulnerable environment. Several chemical speciation studies have been performed for carbonaceous aerosols and inorganic species over the western and central Himalayan regions during the last decade, reporting the dominance of transported aerosol plumes from the Indo-Gangetic Plains.

Part of: GS-Prelims and Mains GS-II: Policies and interventions

In News: The Ministry of Women and Child Development has issued the detailed guidelines for PM CARES for Children Scheme.

Education to the Children (under 10 years):

MOU: Ministry of Textiles and GIZ

In News: An MOU was signed between Deutsche Gesellschaft fur Internationale Zusammenarbeit (GIZ) and the Ministry of Textiles Govt. of India  on Implementation Agreement of Indo German Technical Cooperation Project on ‘Sustainability and Value Added  in the Cotton Economy’.

GIZ project is aimed at

India is the largest cotton producer in the world and also the 2nd largest consumer of cotton in the world with estimated consumption of 303 lakh bales (5.15 Million Metric Tones i.e. 20% of world cotton consumption of 1505 lakh bales (25.59 Million Metric Tones). It plays a major role in sustaining the livelihood of an estimated 6 Million cotton farmers and about 50 Million people engaged in related activity such as cotton processing & trade.

Context: Recently, a document on “Indian Agriculture: Ripe for Disruption” was released by a private organisation Bain and Company.

Key Takeaways of the report

Context: The Panchayati Raj, first adopted by Nagaur in Rajasthan on October 2, 1959, has expanded vastly. There are now 2,60,512 Panchayati Raj Institutions (PRIs) represented by about 31 lakh elected members across India.

What measures can be taken to further improve PRIs role during disasters (like Pandemic)?

The Yokohama strategy,1994 emphasised that it is important to focus on disaster prevention, mitigation and preparedness rather than disaster response alone, to reduce vulnerability. In this respect, certain initiatives can be taken to build the capacity of PRIs.

It is imperative to make disaster resilience an inherent part of the community culture now more than ever.

Context: Federalism is a system of government in which states or provinces share power with a national government. The quasi-federal structure of the Indian nation was settled in after the country became free of colonialism and gained independence from the British. This style of federalism is responsible for the introduction of its cooperative as well as competitive variants in the country.

The Constitution of India has created a strong Central government, but at the same time, it has not made the state governments weak and has not reduced them to the level of administrative agencies for the execution of policies of the Central government. Rather, the states have an independent constitutional existence.

Such an arrangement, if executed successfully, would be a significant leap in enabling the participation of States in determining national policies.

Usually cooperative federalism is seen in socialist economies where most of the resources are controlled by the government. It is being promoted in India through steps like the formation of NITI aayog, passing of GST etc.

Must Read: Cooperative federalism amidst COVID-19

In competitive federalism, the States share a vertical relationship with the Central government while competing amongst themselves. Essentially, States individually work towards attracting funds and investment to aid their developmental activities. This leads to the formation of a free market scenario amongst the States wherein they play the role of the sellers and the investors become the buyers.

A type of Competitive federalism is seen in India where states want more funds and perks from the state government for growth. Also states can be involved in International treaties and business deals. They are also trying to woo MNCs to get more FDI.

Q.1 Guru Ghasidas National Park was recently in news. Where is it located?

Q.2 Which of the following peninsular rivers is westward flowing?

Q.3 Ram Van Gaman Tourism Circuit is launched by which of the following states?

On evictions and development: