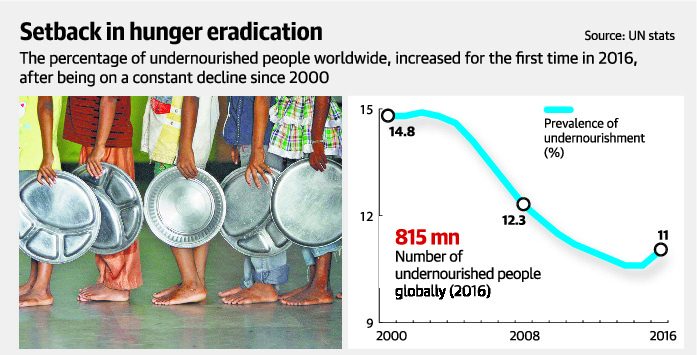 Other facts highlighted by the report:

All these represent a setback to all countries trying to meet the Sustainable Development Goal on ending hunger and achieving food security and improved nutrition.

All this shows that the Centre and State governments are woefully short on the commitment to end undernourishment.

A critical aspect of nutrient adequacy is “diet diversity”, calculated by different groupings of foods consumed with the reference period ranging from one to 15 days.

It is recommended that each person should have diverse diet of at least eight food groups, that include: cereals, roots and tubers; legumes and nuts; dairy products; flesh foods; eggs; fish; dark green leafy vegetables; and other fruits and vegetables.

This low dietary diversity is a proxy indicator for the household’s food security too as the children ate the same food cooked for adult members.

It is time the government looks at the root cause of the issue and finds a sustainable solution for tackling malnutrition. This is possible only when the state focusses on inclusive development by creating employment opportunities for the marginalised which would improve their purchasing power, diversify their diet and, in turn, reduce malnutrition.

The 15th Finance Commission (FC) is in the process of figuring out a fair formula for the distribution of net tax proceeds between the Union and the States, and among States.

The below article deals with how 14th FC missed to consider Northeast states as an unique entity while adopting its formula based tax devolution approach and challenges faced by Northeast due to the missed approach.

The author compares 13th and 14th FC methodology and suggests for few reforms in upcoming 15th FC, which can help special category status to develop in an equitable and efficient manner.

The devolution formula, therefore, is central to the approach of resource transfers.

Did 14th Finance Commission miss something?

There was much merit in this approach, which was in contrast to the 14th FC which used per capita GSDP as an indicator of fiscal capacity uniformly for all States.

The revision of the base year to 2011-12 by the Central Statistics Office from 2004-05 also has created complications.

The Northeast also bears a disproportionate burden of natural disasters every year on account of rainfall.

The Terms of Reference of the 15th FC also mention performance-based incentives based on improvements in GST collection, Direct Benefit Transfer rollout, etc. This would definitely infuse a spirit of competition.

Q.3) Assumption Island was in news recently. It is concerned with which of the following?

Q.4) Operation Cactus is associated with

Q.5) From the below statements about Finance Commission, identify the incorrect statement:

Q.6) Which among the below is not a non-constitutional body?

At the crossroads: on mob violence

Through A Wider Lens