Context All-India Quarterly Establishment-based Employment Survey was recently released by the Ministry of Labour and Employment. 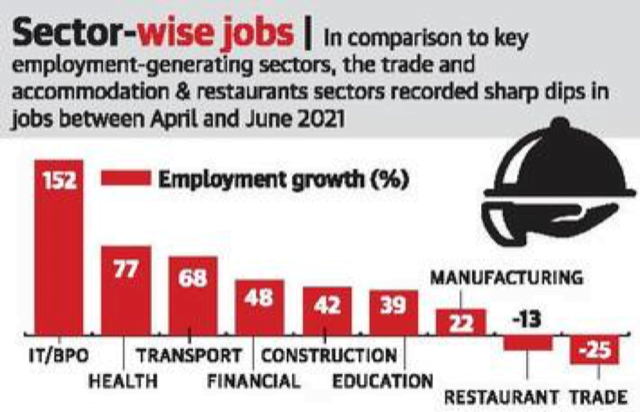 Registrar-General and Census Commissioner of India

Part of: Prelims and GS-I- Population and Census

Context The Union government had recently told the Supreme Court that the caste data enumerated in the Socio-Economic Caste Census (SECC) of 2011 was “unusable”, but in 2016, the Registrar-General and Census Commissioner of India had informed the Standing Committee on Rural Development that 98.87% of the data on individual caste and religion was “error free”.

What is the Registrar-General and Census Commissioner of India?

What is the Socio-Economic Caste Census (SECC)?

Context The Supreme Court held in a judgment that the right of an institution, whether run by a majority or minority community, to get government aid is not a fundamental right.

Part of: Prelims and GS – III – Defence and Security

Context The Defence Research and Development Organisation (DRDO) has successfully tested a new version of the Akash surface-to-air missile Akash Prime from the Integrated Test Range at Chandipur, Odisha.

Part of: Prelims and GS III – Sci and Tech; Space

Context Recently, an international team of researchers made the first recognized direct detection of dark energy.

Part of: GS-Prelims ad GS-II: India and other countries

In News: The two-day Dialogue will be leveraged as a platform to deliberate upon multiple ongoing collaborations in the health sector between the two countries.

Part of: GS-Prelims and GS-II: Government policies and interventions for development in various sectors and issues arising out of their design and implementation

As a result, the CCI slapped a penalty of Rs 873 crore on the companies as well as the All India Brewers Association (AIBA) and 11 individuals for cartelisation in the sale and supply of beer in 10 states and Union Territories.

What is a cartel?

How do cartels work?

According to ICN, four categories of conduct are commonly identified across jurisdictions (countries). These are:

Overall, participants in hard-core cartels agree to insulate themselves from the rigours of a competitive marketplace, substituting cooperation for competition.

How do cartels hurt?

How to stop the spread of cartelisation?

Context: Recently, Rajasthan amended the Compulsory Registration of Marriages Act, 2009, which provides for mandatory registration of marriages, including child marriages.

What is the new amendment about?

Legality of Child Marriage in India

As a fallout of this controversy, Parliament ought to consider the Law Commission’s recommendation to amend the Prohibition of Child Marriage Act, 2006, to make child marriages below 16 years void, and those solemnised when either party was between 16 and 18, voidable.

Context: India has the oldest judiciary system in the world. Our legal and judicial history dates back to 5000 years. In fact no other judicial system has a more ancient and acclaimed pedigree like Bharat-Varsh. Chief Justice of India N V Ramana has called the Indianisation of the country’s legal system the need of the hour. According to him it is crucial to make the justice delivery system more accessible and effective.

What does he mean by Indianisation of the country’s legal system?

Courts need to be litigant-centric while simplification of justice delivery should be the pressing concern. Very often our justice delivery poses many barriers for the common people. The working and the style of courts do not sit well with the complexities of India. Our systems, practice, rules being colonial in origin, it may not be best suited to the needs of the Indian population.

The need of the hour is the ‘Indianisation’ of our legal system to make it more ‘litigant-centric’.

Earlier recommendations include that of –

The common man should not be scared of courts

Q.1 Marib city, recently seen in news, is located in Which of the following countries?

Q.3 In which part of the Indian Constitution, the Fundamental Rights are provided?