Part of: GS Prelims and GS-III – Various Security Forces and Agencies and their Mandate.

Gap in Vaccination of Children reported

Key takeaways from the report about children under five years: 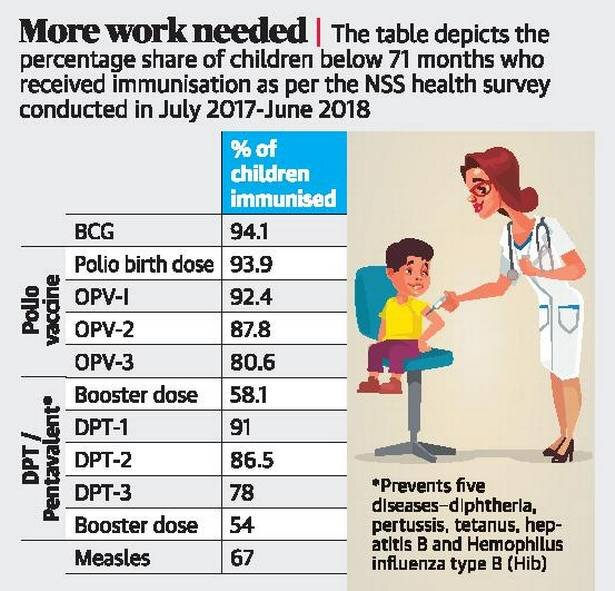 Loss of forest and tree cover: Conserving through Cash for Conservation System

Context:
The unprecedented breadths of the wildfires over three western states of the US, combined with their intensity, scale, speed and duration, have greatly complicated the ability to bring them under control. The 500,000-acre fire is the largest ever recorded blaze in California.

Grim situation around the world:

India has about 31 million hectares, or 11% of its area under forest cover. Over the past 20 years, India has lost 328,000 hectares of humid primary forest.
Deforestation and destruction of wetlands are among the leading causes of annual floods in heavily urbanized areas in Kerala and the cities of Mumbai and Chennai.

Environmentalists estimate that planting a trillion trees can cancel out the deleterious effects of a decade of anthropogenic emissions.

“Cash for conservation” or Payment for Ecosystem Services (PES):

PES systems are complicated to design and implement because they have to be very specific to micro-climatic conditions as well as to the practices of local populations.

Even as the world tries to give up fossil fuels, reduce material consumption, work more from home and turn vegetarian, afforestation and PES programmes can add significant strength to the fight against climate change.

India should set up an ambitious goal of first retaining and then increasing its forest cover.

Context:
As per the economy and employment’s recent data on the contraction of the economy, the shrinking sectors that have been affected the most — construction (–50%), trade, hotels and other services (–47%), manufacturing (–39%), and mining (–23%) — are those that create the maximum new jobs in the economy.

Given the contraction and lack of demand in the economy, there would be a significant dip in urban employment generation.

Multi pronged strategy to tackle the issue of urban jobs:

For workers in urban areas more jobs need to be generated and vulnerabilities need to be reduced by providing decent wages and some form of job security.

Q.1 Which of the following Sustainable Development Goal (SDG) deals with Clean water and sanitation?

Q.2 ‘Health in India’ report was recently published. Consider the following statements regarding the same:

Q.3 Bamboo Technology Parks were set up by which of the following Ministry?

Changing geopolitics in Afghanistan and Arabia:

About right to information for citizens:

Foreign Contribution (Regulation) Act, and how does it control donations

Gap in Vaccination of Children reported