Part of: GS Prelims and GS-II – Policies and interventions and GS-III – Infrastructure

In news: In another two to two-and-a-half months, Bharat Biotech is going to have significant data on its intranasal COVID-19 vaccine whose clinical trials are under way.

What are the benefits of intranasal vaccine?

In news The Union Health Ministry has announced 27% reservation for the OBCs (Other Backward Classes) and 10% quota for the Economically Weaker Sections (EWS) in the all-India quota (AIQ) scheme for undergraduate and postgraduate medical and dental courses from 2021-22. 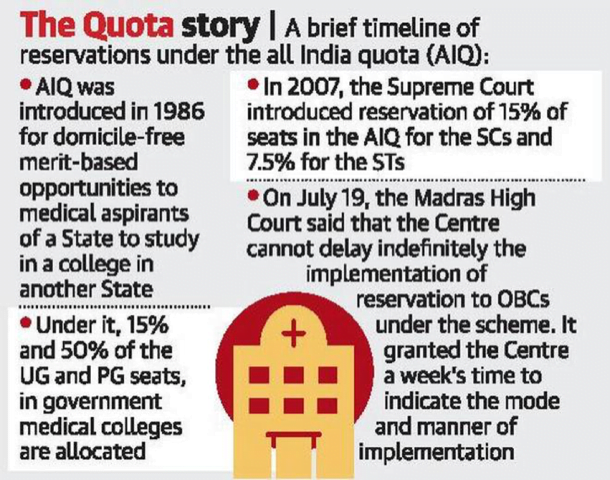 In news: In a recently held event, the 14 Tiger Reserves in India received the accreditation of the Global Conservation Assured|Tiger Standards (CA|TS).

In news: Geo-imaging satellite“EOS-03”is scheduled for launch in the third quarter of 2021 by ISRO.

What is the Significance?

In news National award winning artisan weaver, B Krishnamoorthy, has created a repository with samples of all the designs, patterns and motifs traditional to Kanjeevaram silk sari weaving, preserving fine pieces for next generation.

About Silk Production in India

Shared values: On India and the U.S

Context: Recent visit of U.S. Secretary of State Antony Blinken to Delhi. The visit was meant to prepare the way for more substantive meetings in Washington later this year, including

Key Takeaways of the Blinken’s Visit

Most of the conversations were focused on Quad cooperation in the Indo-Pacific, Afghanistan and on the state of democracy and rights.

What are the divergences between India & USA on Afghanistan?

What were the points of friction on Democratic freedoms?

Despite the attempt from both sides to paper over the cracks, Democratic freedoms is an issue that they will grapple with in the future even as they build upon the strong “Comprehensive Global Strategic Partnership” that the world’s oldest and most populous democracies continue to share.

In the interest of the public: Meghalaya HC order on Compulsory Vaccination

Context: Recently, Meghalaya government had had ordered shopkeepers, local taxi drivers and others to get the COVID-19 vaccines before they resume economic activities in the wake of lock down relaxation post second wave. This was appealed in Meghalaya High Court

In Registrar General vs. State of Meghalaya, the Meghalaya High Court ruled that the State government’s order is violative of the right to privacy, life, personal liberty, and livelihood.

Significance of the case: It raises important questions of how the government can overcome widespread vaccine hesitancy and bring the pandemic to an end.

What was the Court’s reasoning?

The Court could have ordered the government to replace the existing order with less stringent consequences, such as a moderate fine.

Q.1 What are the possible monitoring benefits of Geo imaging satellite EOS-03 which is scheduled for launch in the third quarter of 2021?

Q.3. Kanjeevaram Sarees originated in which of the following state of India?